Northern Ireland is home to the most entrepreneurs who achieve a Â£1m turnover within three years of starting their company, a new report that plots UK small business growth has shown.

According to the Enterprise Research Centre (ERC) more Northern Irish small companies reached the 'magic milestone' between 2011 and 2014 than anywhere else in the UK.

The country has a 10% average for firms hitting the mark with small companies in the west and south regions of the country leading the way followed by 9.7% of companies based in Belfast.

The Northern Ireland average for Â£1m turnover firms compares to 7.9% in London and 6.2% in England overall. Cumbrian firms have the lowest proportion with 2.2% reaching Â£1m.

Professor Mark Hart, deputy director of ERC said: "Part of the story in Northern Ireland is long-standing policy infrastructure, a commitment by government and its agencies to invest in the enterprise agenda from startup through to growth.

"Local policy, through the Department of Enterprise, Trade and Investment and its agency Invest NI, working with partners on the ground, seems to be making a difference.

"There is certainly a stability of policy in the home nations, as opposed to England, where policy can change dramatically between governments. We may be seeing the success of that stability coming through in some of the headline statistics." 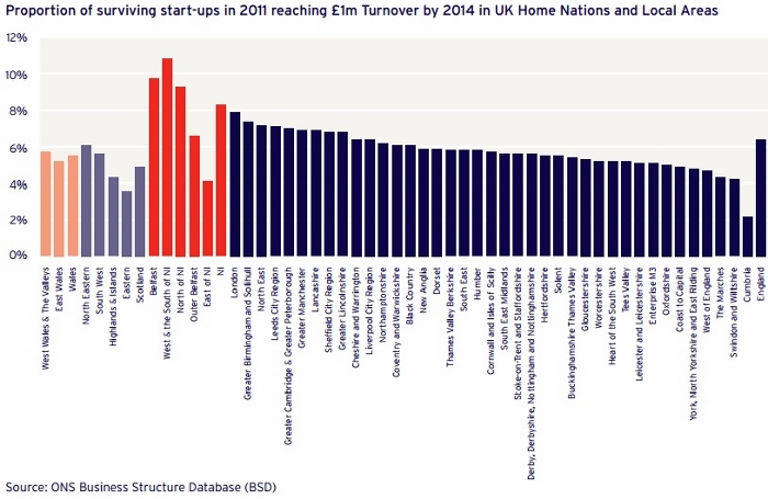 In other findings from the study, SMEs were found to be growing at their fastest rate since the economic crisis in 2008. They added more than 600,000 net new jobs across the UK in 2014.

London though still leads for fast growing businesses, defined as those achieving annualised average growth in employment of 20% or more over three years.

Scotland is close behind London with North and South Lanarkshire having the highest proportions and the Orkney Islands, Glasgow and Edinburgh all having above average proportions of fast-growing firms.

When it comes to startups making it past three years, London has the highest number of companies being set up but is in the bottom 10 for survival rates alongside Leeds City Region, Greater Manchester and Greater Birmingham and Solihull.

Professor Mark Hart, deputy director of ERC, said: "[The report] shows us that small businesses in every corner of the UK are growing at their fastest rate since the Great Recession, while more and more entrepreneurs have the confidence to take the plunge. Overall, the UK now has the highest rate of entrepreneurship in Europe.

"Nevertheless, there remain big regional disparities in entrepreneurship and small business growth. We can see that some areas appear better at breeding success. At a policy level, this insight can help us create an environment for business to thrive throughout the country."