A few weeks ago, we asked you to participate in a survey about business group membershipÂ - and we had a fantastic response! In all, 1,209 people filled out the questionnaire and you gave us some great information about your attitudes to business groups and membership bodies.

Here's the full set of survey results. You can read also read how the results from this survey have helped to shape the new Enterprise Nation Club.

1. Are you a member of any business membership or professional bodies?

Under 'Other' you mentioned a very wide range of regional and trade-related membership bodies, from the Association of Master Photographers to the Heritage Crafts Association. Several bodies came up a number of times, including Women in rural Enterprise and the Chartered Institute of Marketing.

Under 'Other', respondents provided a wide variety of reasons from supporting professional development to free banking. Most commonly, though our respondents noted that networking, referrals and building local connections were top of their agenda.

3. How much are you paying for membership (Â£ per annum)?

4. Do you feel you get value for money?

We also asked why people didn't feel they were getting value for money from their membership. A typical comment was that beyond professional accreditation, respondents felt their membership body offered little to their business. Two other comments stood out:

"Needs to be more involvement between members and organisations. Need to see a ROI. At the moment it is mainly people from the industry talking among themselves."

"You still have to pay a considerable amount for a lot of workshops and seminars."

5. Have you been a member of a business body and left?

"Constant in-fighting taking up meetings, endless discussions of trivia and never getting anywhere."

"It was a local business promotion group - I joined for nearly a year and didn't get a single lead, I decided to put the money into other advertising that was more successful."

6. Have you considered joining a membership body but decided against it?

7. If yes, what was the reason for not joining?

Under 'Other', the stand-out responses were:

"They all seem to be set up for larger small businesses and forget about the micro business - which although may not directly employ people do contribute to the economy and work with other micro and small businesses and can generate work and income for others. They also seem more interested in trade and manufacturing."

"There are a lot of business bodies and it's difficult to know which is best value to join."

"Their offerings were duplicating those I was getting with the other organisations."

8. If there were a membership body for a business just like yours, what would you like it to offer?

The 'Other' service most commonly requested by respondents was some form of business mentoring or peer support. Networking and collaboration loomed large - whether face-to-face or online - but so, too, did the need for ad hoc, temporary, and co-working spaces.

9. How old is your business?

10. How many employees do you have?

11. Where do you run your business from?

12. What sector do you operate in? 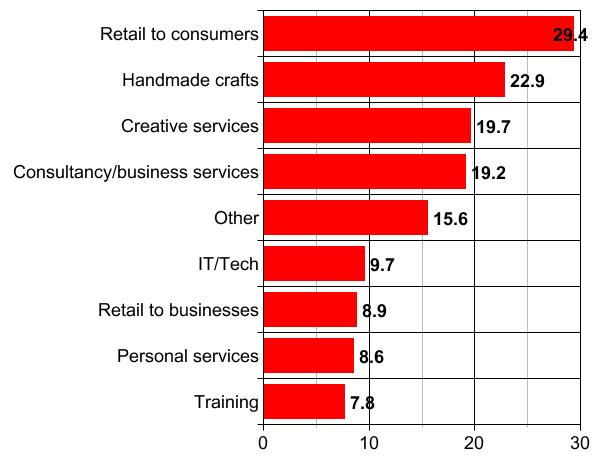 Thank you for taking part

Our respondents included event organisers, photographers, publishers, farmers, architects, makers and at least one person who claimed they were a suphero! We're extremely grateful to all the readers who took part in the survey - we've learned a great deal. And, of course, one lucky respondent won an iPad mini - congratulations to freelance illustrator, patternmaker and gitware creator Deborah Ballinger! You can follow Deborah on Twitter at @DBIllustrations. We'll be running more surveys on Enterprise Nation, so keep your eyes open for future questionnaires in our new Research section.