Lauren Riley, who appeared in the 2014 series of The Apprentice and now runs The Link App, reviews the first episode in the new series of the BBC show. 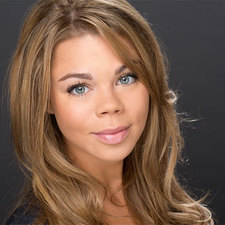 I expected the evening to be slightly emotionally charged watching a new set of candidate battle it out, where I had been 12 months ago, but on the contrary I think it taught me how much has happened in my life and business since to make one year seem like a lifetime.

So it begins with the same trumped up lines pedalled year on year. A slight variation on the wording but it all boils down to mean "I am the best thing since sliced bread". Although it makes you cringe, we all know they have to make such outrageous claims to get through the door; the BBC are looking for entertainment after all.

The first boardroom is the best. It's likely to be the only time they will smile and truly mean it. Much less pressure than any other time you will be there, whether you win or not. They swapped the teams round to give the age old boys vs girls format a break. Hardly revolutionary but anything that gets away from judging or labelling based on gender is a plus for me as a viewer.

The task was simple. Source fish, sell it and the team with the most profit wins. The first task is always about sales and sales with a profit objective are always about margins. Some candidates did utter that but not enough to be picked up by those making the decisions.

As a business owner I thought Dan was refreshingly honest from the word go. He declared himself a successful entrepreneur but admitted he had made mistakes but learned from them. I'm a public speaker and when I tell my story I focus on the good and the bad. Things that I thought were mistakes in life all took me to this point. I am as grateful for those lessons as much the successes and I think most successful entrepreneurs will tell you a not dissimilar story.

Project manager on the first task is always a tough role and I have respect for anyone volunteering on day one. So ultimately the loosing team identified that margins would be key but failed to implement it. They bought from the first supplier they dealt with and although their price point was high, at Â£9.00 for a tuna salad, it was unrealistic. That was bound to drop as the day went on and the margin wasn't there to account for it. They made a meagre Â£1.87.

As always three candidates were back in the boardroom. Brett had swerved the PM role despite clear experience in the food industry, but firing someone based on their inability to make a fish cake seems harsh even for Lord Sugar. April, the PM, had admittedly made mistakes but I couldn't help feeling she wasn't going to go. April had shown some strength stepping up on day one and made some decisive moves which didn't entirely pay off but she stuck by them.

The remaining candidate was Dan and I am afraid I knew his fate was sealed from the moment he uttered something along the lines of "I'm not good at sales but I have other strengths". I admired his honesty but Lord Sugar's background is sales and he has always held that skill in high regard. My background isn't sales either but when it comes to my business, The Link App, my passion shines through and it never feels like sellin. Having said that I do appreciate it's hard to be as passionate about fish on day one of selling it but I thing Karen summed it up well when you said: "everyone can sell something". So Dan had to go, as much for his sake as anything. Week one is the easiest it's going to be. I think April and Brett may fair well from having this harsh experience early on.

Claude replaces Nick on this series, but he wasn't too vocal this episode. Claude is famed for being ruthless but actually in real life he's lovely! However Nick will be missed!

Meet all the candidates from the 2015 series of The Apprentice here.