France-based businessman Mohed Altrad has been crowned the best entrepreneur in the world.

The boss of Altrad Group was awarded the honour at the EY World Entrepreneur of the Year Awards at a lavish ceremony in Monaco.

In a venue with a roof that retracted to reveal fireworks exploding over Monte Carlo, Altrad was among entrepreneurs from 53 countries competing for the top prize. 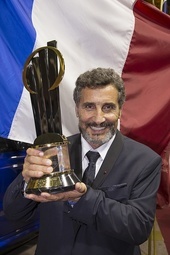 Born in the Syrian desert to a Bedouin tribe his mother died shortly after his birth, and he was raised by his grandmother who forbade him from going to school. Altrad went nonetheless and spied on the classroom through a hole in the wall.

A teacher spotted him and allowed him to sit in on the lessons. He became the top student and went on to study in Raqqa, Syria after which he earned a scholarship to continue his studies in France.

Altrad secured a PhD in computer science and then worked for various large companies. In 1985, with his English partner, he bought a nearly bankrupt scaffolding company and has since grown it into Altrad Group, a leading construction equipment business.

The entrepreneur has built the company partly through acquisition and it now employs more than 7,000 people around the world and has a $1.13bn annual turnover.

Altrad, who is included on the Forbes Billionaires List, is also a writer and his partly autobiographical novel, Badawi, is now taught in some French schools as part of the literature curriculum.

Speaking on stage after receiving the award Altrad said: "This is a message that all of us can change our destiny and improve the world."