International press coverage and death threats are not usually part of a new entrepreneur's start-up journey, but they have been for the men behind Cereal Killer Cafe, the controversial breakfast cereal cafe.

We share the insights and lessons delivered by co-founder Gary Keery at an event in London today.

It wasn't long after Cereal Killer Cafe opened that the media noticed.

A Channel 4 News presenter walked into the business last December and accused Gary and his brother Andy of being out of touch "hipsters" for selling cereal at Â£3 a bowl in a London borough with high rates of poverty. That report went viral as did the entrepreneurs' response on Facebook which led to a packed out cafe and thousands of social media shares. The business is now looking to expand despite never having spent a penny on marketing.

Cereal Killer Cafe is certainly riding the wave of success, but it wasn't always the case. 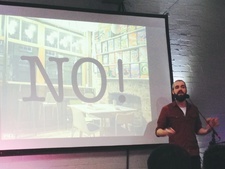 Speaking at the Secret Sauce Conference, part of Hackney Council's 'How to become an entrepreneur' event. Gary Keely shared his story.

Wanting to start their own business, the brothers discovered that 87% of British adults in the UK consume breakfast cereal, but most eat it at home and in the morning. Why not let people have it in a cafe whenever they want and let them try cereals from around the world? Their idea was born.

But that was the easy part.

Keery related how the word 'no' was a common feature of his early business experience.  The brothers were turned down for funding three times by Lloyds and once by Barclays, while a business adviser told them their idea would never work.

When looking for premises, they also struggled to convince landlords and those that were willing to offer buildings wanted to charge high rents. They also failed with a  crowdfuding campaign on Indiegogo by raising just 2% of their Â£60,000 target.

"Our perks [what you offer backers in return for funding] were too high," Keery explained. "We got thousands of people visiting the site but no-one was biting. When they only saw 1% of our target had been achieved, they didn't want to buy it."

Despite all that though, the Keerys did manage to get funding from Virgin StartUp, which delivers finance through the government's Start Up Loans programme, and secure a building on Brick Lane in East London. Look for other organisations beyond the traditional that are willing to back you, Keeley advised.

Unsurprisingly the entrepreneur was asked how he has dealt with so much rejection. "You have to stay positive", he said. "If you can't motivate yourself to open a business, you're not going to convince anyone else. If you're passionate and believe that should should be enough."  You should also be careful about who you get advice off, he added.

The Channel 4 News attention isn't the only time the cafe has made the news. In September it was targeted by "anti-gentrification" protestors. which again led to huge levels of publicity with hundreds of thousands of shares of a story on high profile site Mashable.com. "Some people absolutely hate us and some absolutely love us," Keery said, "but both groups talk about us and both share posts about us."

So what can other business owners learn about achieving that much sought after viral moment? "There's no secret formula," Keerey admitted. "You've got to have a USP and you've got to stand out. We're a cereal cafÃ©, we're twins, we're got beards, we're in Shoreditch, we're Irish and we put our story into the business."

Before the Channel 4 moment the twins also contacted journalists and food bloggers directly. They tracked down the email addresses of reporters at publications like Time Out and explained their story. Keery confesses that they "pestered" websites and one of them, Londonist, eventually wrote about the cafe. Other stories then followed.

The Keeleys are now focusing on opening new cafes in other UK cities as well as locations overseas including Paris and Vancouver. Rather than franchising they've chosen an international licensing model which Keery said is "a lot easier and cheaper to manage". They're also looking to import more cereals from outside the UK to add to the 90 out of the 120 they already stock.

But what about those protestors, some of which have issued death threats? Have the brothers tried to convert them into customers?

"No", said Keery. "I'm not going to try and justify myself to them as they're never going to be my customers, I'd rather be a positive person and focus on the customers who will come into the shop."