Learn somethingWhy you should approach marketing like a scientist
Blog

The importance of customer data can't be underestimated in modern business - especially for online retailers. For Ian Cowley, founder of Cartridge Save, blending a scientific analysis of data with traditional marketing creativity has reaped rewards - his start-up now turns over Â£20 million a year. Here's why Ian thinks we should all approach our marketing like scientists. 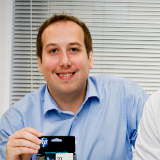 Marketeers for internet companies have never had it so good, writes Ian (left). For the first time ever information is readily accessible; and what's more, there's tons of it. The beauty is we can constantly test and experiment and get almost instant feedback. Through tactics like analysing the channels that drive traffic or measuring margins on projects, we can quickly make an informed decision on what works and what doesn't in every project or service we implement.

Painlessly, a campaign can evolve very quickly, with elements tweaked or optimised in response to the figures. Sometimes it's like hitting a seam, and you find a mine of opportunities from just one data-based lead. For this reason, campaigns become relatively low risk as the testing process is quick and you can cut your losses. In vast contrast to above the line, where you're at the mercy of expensive print runs, time-consuming design briefs and often flawed focus groups.

The science of marketing

What this means is science now has real relevance to a discipline traditionally regarded as an art. It's all about maths, the numbers and the best variable combination. As is the discipline of a scientist: gone are the stereotypical liquid lunches; and in are days of constant trialling and testing. The passion remains though. Yes, success is cut and dry: either the figures are good or they're not and it all comes down to the bottom line. However creativity is still a pre-requisite for generating the initial campaign and it's here where gut instinct remains. Plus there will always be problems to solve. As a service provider, your customers will be a constant source of issues, which in turn will drive inspiration.

The future is data

That said, we purposefully recruit people from a science background as marketeers. We share the belief of Hal Varian, chief economistÂ atÂ Google who believes the futureÂ belongs to the companies andÂ peopleÂ that turnÂ dataÂ into products. In order to move faster and keep ahead of our competitors, we need a marketing team of people who can put data to use. Granted, it's hard to recruit these people. But that's primarily because the people we need don't know this job exists as a career for their skills. But it's exactly why we employed our marketing director Sean Blanks, ex-British Aerospace, and it's for this reason we're now a business with a Â£20m turnover. To be a market-leader - whatever your business - we recommend that you obsess over data. We often find serial entrepreneurs struggle with this single-minded approach: their brain is already racing to the next project. However by concentrating on just one or two things at a time, you can test a system to finality.

Using customer data to your benefit

The tools needed to test are as applicable to an online retailer as a sandwich shop. Comparing competitor prices, measuring the success of one dish over another, are all important to getting ahead - as is working out your short-term goals (what are your quick wins?), your medium term targets (implementing the quick wins), and your long-term aim (where do you want your business to be?). We also suggest you look at who is doing well. What could you learn from them and their approach? Finally, keep it in-house. Knowing what your customers respond best to and learning how to influence that choice, is imperative to making your company a success. Ultimately we're encouraging a new breed of marketing men and women. All cadets of the Data Army. But this is because all business owners have access to the same sets of data: the only thing that sets us apart is who can get the most out of it. Ian Cowley is the founder of Cartridge Save, the UK's largest dedicated printer cartridge company. Using a scientific approach to marketing Ian and his marketing director Sean Blanks, have created a Sunday Times Fast Track 100Â  e-retailer which manages 30,000 orders a month; ranks above all its competitors on independent shopper surveys on sites including Google, Pricegrabber and Shopzilla; and is the UK's fastest growing printer supplies retailer in terms of sales. Photo credit: James Vaughan

From content to SEO to pay-per-click advertising, The Small Business Guide to Online Marketing offers all you need to know to take control of your online marketing - and it's written in a clear and accessible way. It's available as a downloadable ebook from the Enterprise Nation shop. [product id="56640"]