Smallest firms fastest to settle bills (and they're getting faster)

Britain's tiniest businesses settle bills the fastest out of all sizes of business and do so almost four days quicker than the national average, new research has revealed.

Data from Experian showed companies with one or two employees dealt with overdue invoices an average 20.58 days beyond terms (DBT) in 2014/15, half a day quicker than the year before and ahead of the national average of 24.29 days.

All sizes of businesses have speeded up their payments over the past year but large companies with more than 500 employees are still the slowest at 34.18 days, almost 10 days more than the national average. 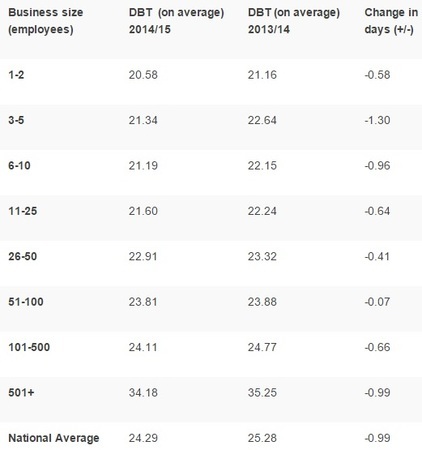 When it comes to business sectors the food retailing industry improved its performance the most by reducing the time it takes to settle bills by 3.15 days, falling from an average of 30.59 DBT in 2013/14 to 27.44 in the last 12 months. Supermarkets though were above average for the food sector by still taking 33 days to pay up.

Agriculture, forestry and fishing businesses were the best at paying bills, only going 9.98 DBT on average, whereas the postal and telecommunications industry was the poorest performing, taking 44.44 days.

Companies in the North West of England showed the greatest improvement in payment performance, settling overdue bills 3.78 days faster at 30.44, but it was still the region which took the longest time to pay its bills.

Experian's Max Firth said: "The improved payment performance shown by businesses of all sizes in the last tax year is an encouraging sign for the economy. Cash flow is especially important to SMEs. Late payments can hinder their profitability and growth prospects, while also having a knock-on impact on suppliers.

"Although invoices are broadly being settled faster, businesses should not be complacent and need to monitor customers to identify any potential problems at an early stage. They can then discuss payment terms where appropriate and have more control over their cash flow."

Late payment is an ongoing problem for British businesses and small company bosses have called on the government to do more to tackle it especially when it comes to large corporates paying their small suppliers.

The government has announced it will introduce a conciliation service to help small companies settle payment dispute, but some commentators have said that doesn't go far enough.