Myself and an iStock by Getty Images photographer RenÃ© Mansi (contributor urbancow on iStock.com) spent three exhilarating days travelling around England. Our mission was to photograph 10 entrepreneurs in their home office environment for an exhibition at Somerset House. The exhibition will be officially launched at the Home Business Summit on 15th August.

The distinction between our day jobs shooting commercial photography and this project is that we are used to working with models in a controlled environment. On this occasion, we travelled to each home with no idea what we were going to shoot or what it looked like. This in itself was exciting and actually also a lot of fun. Each 'subject' that we met had a fascinating story to tell; how they set up their business, how they made it work from their homes and with each story we built up a sense of their personalities and their brand's personalities. We tried to bring that sense to the images that are now in the exhibition.

We started out very early on a Wednesday morning driving from Surrey and Dorset to Maidenhead to meet Ed Vickers of Jollies Socks (jolliesocks.com). The only time we had traffic issues was on the M25 at 6.30 in the morning! At the time of our visit, Ed was based out of his bedroom in his childhood home (he has since relocated to London) so we were lucky enough to meet his mum, brother and dog. He showed us the garage full of boxes of socks, both the stripy socks that people buy and the heavy duty socks that are donated to the homeless. We had a lovely chat and cup of tea and then headed off to Gloucester to meet Shoo.

Shoo Rayner (shoorayner.com), lives in a sprawling home at the edge of the Forest of Dean and has a studio at the end of his garden. It was lovely to hear how Shoo had diversified his business, sharing his knowledge and skills with a new generation of illustrators with his ShooRaynerDrawing Youtube channel. Shoo kindly made us lunch and we set off on a shorter journey to Bath. In Bath, we met Victoria Cramsie (paperboywallpaper.co.uk) and her sons at their beautiful home and learnt about her growing wallpaper business.

Our final stop of the day was at Niamh Barker's house where we visited the garage where she runs the Travelwrap Company (thetravelwrapcompany.com). Niamh had just returned from a busy show in London but was very welcoming and it was lovely to spend time surrounded by gorgeous cashmere!

We finally arrived back in London at 9pm.

The following day was much simpler - we were off to meet Jayne Hynes (kiddyum.co.uk) in Stockport. The bulk of the day was taken up with travelling! We met Jayne and her daughters at her family home and shared not only a cup of tea but a freshly baked carrot cake too! It was really interesting to hear about the quality control restrictions placed on food produced for supermarket distribution.

Unfortunately our final day also coincided with the hottest day in London this year. What appeared on paper to be a simple schedule - 4 shots in the East and North of London, actually became a grueling battle against the heat and slow running, packed train services.

We started early in the morning meeting the Mr Singh's (mrsinghssauce.co.uk) family near Barking. Luckily, Kuldip, his younger brother Sukhi and his father (Popa Singh who came up with the original recipe) were available to meet us despite a hectic delivery round that they needed to embark on that day. We managed to all squeeze into their garden shed - the site of the original cook! Despite it being a small space, we got some great images of the three men. They were a lot of fun and very easy to photograph.

Leaving with a bag full of sauces (which we highly recommend by the way), we headed off to Peckham next. It looked close by on the map but it took us well over an hour to find our second destination. We stepped off the steaming hot street into an oasis of cool and calm in the shape of the home/office of Lisa and Tida Finch of Finchittida Finch (finchittidafinch.com). Lisa and Tida are twin sisters and are half Lao, not only do they bring their heritage into their jewellery designs but they also give back to Laos in the form of support for the Mines Advisory Group, who are working to clear landmines dating from the Vietnam War. We had a great location to shoot in, surrounded by their designs and tons of natural light - it was so straightforward! 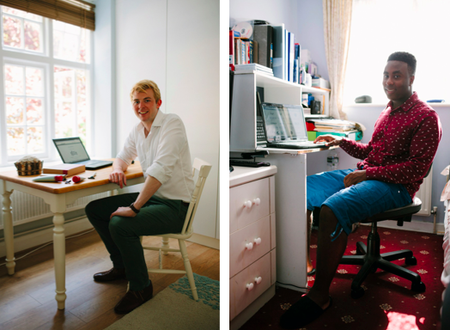 Next up we travelled up north to Highgate to meet Oliver Bridge who runs Cornerstone shaving subscriptions (cornerstone.co.uk). Oliver had just moved into his flat so very kindly supplied us with a perfect canvas for shooting him at his desk! It was fascinating hearing about Oliver's serial entrepreneurial endeavours and he is still so youngâ€¦ Oliver cooled us down with some cold water and we were able to capture him at his laptop in a few minutes.

Last and by no means least we headed over to Charlton to meet Corby and his mum. Corby runs thatsalesite.com from the bedroom of his childhood home, a site that he and a friend started in 2013. The site is incredibly slick looking and is well supported by the large retailers. Again, despite not having a huge amount of space, RenÃ© managed to get a great shot of Corby at his desk whilst also capturing his character very quickly. 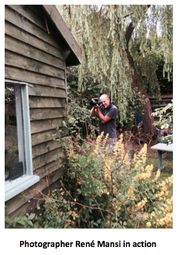 Despite the heat and our exhaustion, we were sad to finish the project. Meeting such a diverse and interesting group of people in a short period of time was truly inspiring. They all came from differing backgrounds, had a huge range of life experiences but all had spotted a gap in the market and taken up the challenge of filling it. We hope you get a sense of how fabulous they are through their portraits! It was such a pleasure to spend time with them.

The Exhibition of Entrepreneurs will be on display at the Great Arch Hall at Somerset House. iStock by Getty Images is delighted to be involved with Enterprise Nation in supporting entrepreneurs and small business in the UK.

As members of Enterprise Nation, you get 15% off iStock by Getty Images. Simply enter Enterprise15 at checkout. Here's a selection of related iStock images curated by Rebecca, looking at Entrepreneurs and Small Business Owners. 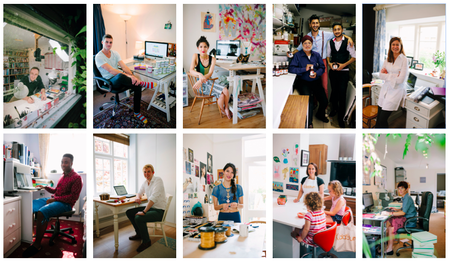