Sajid Javid has delivered his first speech as the government's business secretary in Bristol, the city where he grew up above his parent's shop. 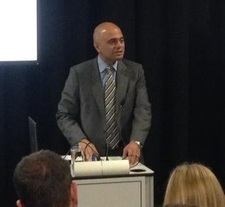 In an address filled with anecdotes about his childhood experiences helping run his mother and father's womenswear store Javid claimed that it was then that he learnt the principles of what it takes to run a small company.

"Aged nine or 10 I helped my dad in the shop, wearing the money belt," he said. "Our fortunes and happiness fluctuated with the business. But it gave me an unwavering belief in the rewards of hard work."

The new business secretary used his inaugural speech at Bristol's Engine Shed startup accelerator to announce the government's new Enterprise Bill which will form part of the Queen's Speech.

The proposals will tackle red tape, with the government promising to remove Â£10bn worth of bureaucracy, and introduce a small business conciliation service to help small firms resolve late payment dispute with their large customers.

A video of his full speech is below:

After the speech Javid took questions from the audience including Dan Martin, Enterprise Nation's head of content. Watch a video of the full Q&A session below: