HMRC's own assessment on the impact of new EU VAT legislation underestimated the number of potential small businesses trading e-services with EU countries by more than ten thousand per cent, an Enterprise Nation report has uncovered. 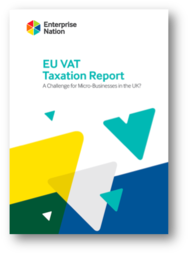 The EU VAT Taxation Report, produced by Enterprise Nation, reveals that in 2013, just 15 months before the rules were due to come into force, a HMRC investigation put the figure of non-VAT registered firms likely to be affected at 5,000.

In fact, the report discovered, at the nearby Department for Business, Innovation and Skills (BIS), Government figures put the number closer to 350,000, but that information did not inform HMRC research.

The report suggests this then impacted how the information was communicated and to whom - which in reality meant small firms under the VAT limit trading their digital products in the EU found out about the new charges a matter of weeks ahead of implementation.

It also meant there was a lack of awareness amongst the marketplaces that had been empowered to offer a solution to those affected, causing chaos, the report claimed.

The immediate consequence of it is that it left thousands of small firms vulnerable with no alternative but to take a painful hit to profits while facing a long and expensive fight with not just British, but European tax authorities.

The long-term consequence is likely to be a hike in costs for digital services in the EU.

"The EU VAT regulations caused havoc in the digital small business community. If details of the new charges and reporting responsibilities had been communicated earlier, we're sure there could not only have been more opportunity to make amendments to the bill, but that an entrepreneurial solution to the problem could have been developed.

"As it was, not even the marketplaces themselves had prepared new software or worked out the finances.

"This report shows that while a minimum VAT threshold would be the best solution, that may well be some way off, partly because other European countries have never had a threshold at all, so will be reluctant to accept one at this stage.

"Micro enterprises are a hugely important contributor to the economic growth and innovation and their functioning should be stimulated, not hindered. As they stand, these rules make it attractive for small firms to cease trade with Europe - so instead of facilitating the integration of the internal market the VAT tax reform may actually aid its fragmentation."

The report found that the number of businesses likely to be affected by the new rules dramatically increased after 2008 when the legislation was agreed.

Between 2006 and 2014 the European e-commerce market nearly tripled, growing from â‚¬106 billion in 2006 to â‚¬317.9 billion in 2014. This steep increase was facilitated by a constantly growing amount of internet users (up by 22%) and e-buyers across Europe.

Business blogging, selling music, e-books, e-learning or other digital products and services through a simple website underwent a fast development which made it one of the easiest businesses to start and go global. The report cited that the number of self-published titles in the US grew by over 400% between 2007 and 2012 - a boost likely to be compatible in the EU market boom.

And HMRC had expected that the rest of those below the VAT threshold would already be selling via marketplaces like Amazon, in fact 65 per cent said they sold their products via their own website with only 17 per cent reporting that they sold via a platform.

Nonetheless, nearly half of the listed marketplaces were ready to take care of VAT collection and filing at the beginning of January 2015. Yet, most of them only announced that at end of December, which left sellers in the difficult position of not knowing how to continue trading until the last minute.

The EU VAT Action Group suggests selling via platforms adds up to 70 per cent costs to trading with Europe, eradicating any profit and putting sole traders of digital products out of business, unable to grow an element of their company.

They also suggest a trend towards centralisation of commerce in marketplaces and loss of independence of individual traders is bound to have implications on competition and competitiveness. They argue not only it will increase the market share of some of the biggest players like Amazon (currently holding 85% of the e-books market), but it will also result in a considerable reduction in micro businesses profit margins or a corresponding increase in prices.

The report calls for a Tech Hack to find a simple and cost-effective solution for small businesses to adopt and be VAT MOSS compliant.