We took a group of entrepreneurs from the South West to 10 Downing Street this week to meet Daniel Korski, adviser to prime minster David Cameron.

The meeting was led by our South West Champion Alison Edgar, founder of Sales Coaching Solutions.

Alongside Alison and Dan Martin, Enterprise Nation head of content, were: 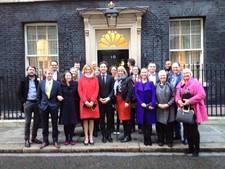 Jessica May, Caroline Sparks and Gaby Lixton expressed concern over the impact on small businesses of the government's new dividend tax. Jessica suggested a potential change to payment on account to minimise impact.

Mike Jackson called for more support for funding and investment for small businesses outside of London that replicates the success of schemes in the capital.

Marcus Whittingham praised the benefits of the government's Growth Voucher scheme which he said significantly boosted his business.

Fran Hope expressed concern about the impact of the abolition of employers' statutory sick pay rebate.

Denise O'Leary commented on improvements that have made it easier for small businesses to bid for government contracts and called for better visibility of lower level public sector contracts with a value of under Â£10,000.

Debbie Williams raised the issue of future funding for the promotion of apprenticeships to small business owners.

Stuart Pearce discussed the Energy Savings Opportunity Scheme and whether it will be extended to smaller businesses.

Alison Edgar said: "It was such a pleasure to lead the party of South West businesses to 10 Downing Street. Having a direct ear to Daniel Korski, the adviser to David Cameron, not only makes businesses in our region feel valued, but gives us assurance our opinions are being listened too.

"My selection of delegates came from a wide range of industry types with experience in sectors such as manufacturing, export, trades, apprenticeships, tech and accountancy, so a variety of relevant topics were raised."

Thrilled to spend some time yesterday at No10 talking about SME's bidding to government @e_nation #entrepreneur pic.twitter.com/OezR1yz1f1

Thanks @e_nation for a great day out to No. 10! Let's hope our voices are heard pic.twitter.com/as0NI8u4cH