The number of entrepreneurs using credit cards and overdrafts to fund their business is on the increase, new research reveals.

Just under a quarter of SMEs used overdrafts in the first half of 2019 compared to 19% in 2018, while 19% used credit cards this year compared to 14% last year, according to the latest findings from the SME Finance Monitor.

The study by BVA BDRC, which launched in 2011 and is based on more than 150,000 business owner interviews, found 46% of SMEs were using external finance between January and June, an increase on the 36% in 2018, with usage of credit cards and overdrafts driving the rise.

The findings mean that for the first time since 2014, there were more SMEs using finance those defined as a 'permanent non-borrower';  businesses not using finance and showing no inclination to do so.

But despite the wider use of finance, attitudes to funding have not softened; 29% said they were happy to borrow to grow, down from 32% in 2018 and the lowest level recorded to date.

Where small businesses go for finance

Just 4% of SMEs said they had a need for funding in the previous year, unchanged on 2018, with 49% saying it was for cashflow reasons.

Most business owners took some sort of action to find funding but micro firms and sole traders were most likely to do nothing with 14% taking no action.

Businesses with no employees were also less likely to have spoken to an adviser such as an accountant or a funding provider (34%), compared to 51-58% of those with staff. 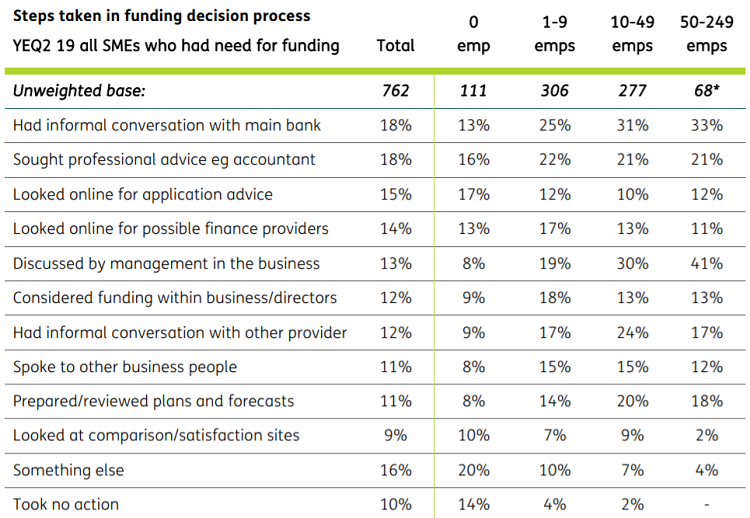 An impressive 80% of SMEs reported making a profit in the previous 12 months, a figure that has changed little since 2015. Businesses with 50 to 240 employees were enjoying profits of around £300,000 compared to £6,000 for firms with no staff.

The study found an overall 50% of small and medium sized companies are planning to scale operations over next year, with 48% of companies with no employees predicting growth.

The figures are a return to the level recorded in 2013, but uncertainty around Brexit could hinder the positivity.

A quarter of SMEs saw political uncertainty and government policy as a major barrier to business success, compared to 10% in 2015 and 19% in 2018.

"We are living through uncertain times and this is being reflected amongst SMEs. They remain profitable, but more see improving profit margins as a priority. An increasing proportion are planning to grow, however there is also an increasing gap between growth achieved and expected.

"Use of finance has increased, yet appetite for finance and new applications remains limited. Most applications are made to the main bank for loans or overdrafts, and most of those who apply are successful, but there are signs of more SMEs considering self-funding alongside, or instead of, an application for finance.

"Future appetite for finance remains stable, although an increasing minority of SMEs are looking to reduce their use of external finance."

Personalised finance options for start-ups, small businesses, sole traders, freelancers and other business professionals. Take the Access to Finance tool and get recommendations tailored to your financial needs.