Learn something10 minutes with Jamal Edwards, founder of SBTV
Blog

This week, we caught up with Jamal Edwards, the young entrepreneur behind youth lifestyle channel SBTV. He tells us how he got started with the brand and building a broadcasting platform from scratch that now boasts over 250 million YouTube views. We also look at how he's using his experiences to help the next generation of young entrepreneurs and his tips for anyone starting up.

When it comes to business Jamal has always been a problem solver and a positively disruptive force. As a shop assistant in Topman he was tasked to sign shoppers up to the store card. He didn't do it how his manager asked - he found his own solution, engaged the customers in a different way, and managed to recruit the most signatures.

At the time Jamal got his first camera, he recalls his friends were mostly trying to be MCs or footballers. He decided to focus on something different. He started to shoot films. His mantra - "Chase dreams, not competition".

He researched the best way to shoot videos and put them out using YouTube, which at the time was only one year old. The platform wasn't known for music at the start of his journey, it was more comedy. Jamal recognised this as a gap in the market.

After a lot of hard work and persistence SBTV got some serious recognition and he started to work with more mainstream artists. When the channel hit 100 million views he didn't stop - he doubled his audience and branched out into fashion, sport and comedy.

Jamal saw SBTV as an opportunity:

Jamal thinks it's key to find a mentor - someone to voice plans and ideas with if you're thinking of starting a business. He didn't have enough of that when starting out, no one at school told him he could be an entrepreneur, so now he takes time to support others. Jamal is currently working with Joe Carnell, co-founder of UGOT, a food and drinks brand with the aim to give people the opportunity to live a healthy on the go lifestyle through a chain of coldpress juice and health food bars.

Looking up to entrepreneurs

Jamal is interested in entrepreneurs with global recognition, a strong brand and hype surrounding their businesses. He believes in Oprah Winfrey, Simon Cowell and Richard Branson. He also cites Dr Dre and Jimmy Iovine, the creators of 'Beats by Dre', as people he looks up to.

As for people looking up to him, it still feels strange for Jamal - "It's mad", he tells me. People contact him on Twitter and Snapchat regularly to thank him for his work. This only serves to drive him forward, to keep on working hard and building his brand. "Don't get complacent", he says.

I ask Jamal for his tips for anyone looking to start a business today:

I met Jamal at London's Barbican Centre where he joined the Barclays debate, Entrepreneurs are born, not made. He sat on a panel with fashion designer Roksanda Ilincic; Russell Hall, co-founder of the Hailo taxi app; serial entrepreneur Doug Richard and Greg B Davis, managing director of behavioural and quantitative investment at Barclays. 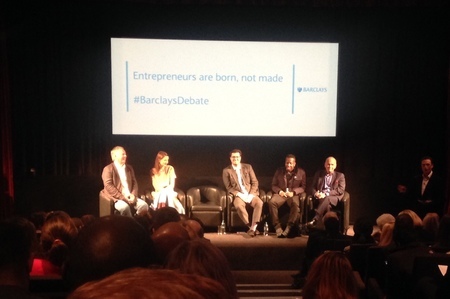 Within an hour of the event, there were calls from the facilitator to "make Jamal Mayor of London" - an idea unanimously supported by the auditorium.

Jamal says he was born 5% an entrepreneur, but he's learned and nurtured his entrepreneurial skills to get to where he is now. In meeting Jamal, I can understand that. On top of this, what came across was how much of an engaging, imaginative and inspiring person he is.