You get the feeling, chatting to That Works For Me founder Jess Heagren, that she's well on the way to becoming a real industry disruptor.

Her company, after all, is plugging not so much a gap in the recruitment world, but a chasm that COVID is only making wider. Will the world of work ever look the same again? Not if Jess has anything to do with it.

Fresh from winning our Female Start-up of the Year accolade, we caught up with our December Member of the Month to find out what it's like to grow a business in the middle of a pandemic, why entrepreneurs should strive for simplicity, and how you really can't underestimate the value of a strong support network.

Jess, tell me the story of how you arrived at the idea for That Works For Me.

"I was quite high up at Direct Line Group. I managed 600 people. But I felt like an outlier. Insurance is very much a man's world. And I was worried that, when I had a baby, everything would change.

"There's definitely a cut off in the insurance industry. You don't see many women with children over the age of 35. I wanted to fix this, but when I went back to work five months after the arrival of my first child, I was the only person on the flexible working arrangement. It couldn't work if it was just me.

"When I fell pregnant with my second child, I couldn't keep it up - not with the travel, the meetings at crazy times of day and no time to do any work. And that's what happened. I felt lost for a few months, but I met lots of other mums in the same position.

"One particular day sticks out. I met a friend who'd been marketing director for a well-known alcohol brand. She told me that she was planning to work at a wine retailer a couple of days a week, behind the till. She has this incredible CV, all these skills and experience, so to me it didn't make any sense. 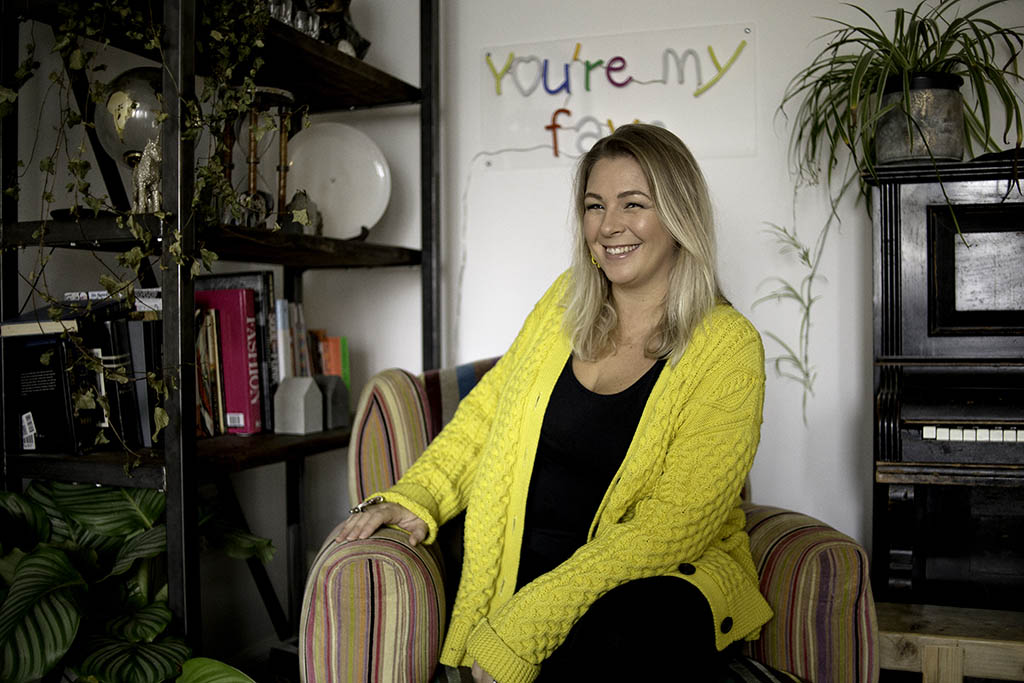 "Later, another friend called. She had been massively successful in the catering world. She was in floods of tears. Her bookkeeper, who I think was quite junior, got her cash flow wrong. She was on the brink of going bust. After calming her down, I asked why she didn't have a CFO. She said her business was too small, that there wasn't enough money to pay someone full time.

"That's when a lightbulb went off in my head. What if she could get someone really excellent for just two or three days a week? She'd benefit from their incredible experience; they'd benefit from a job they're genuinely interested in that matches their needs. That's when I started doing some research."

What did you find?

"That there are recruiter platforms at one end of the spectrum and freelancer platforms at the other. There was nothing in the middle that looked though a lens of remote and flexible working.

"So, I teamed up with my best friend Nicola Goode, who's a programme director at a digital agency. We wrote a 120-page spec for this great platform, and we had it built over in India. We had to do quite a bit of work to get it into a releasable state, but we went live with a beta version in December 2019.

"We quite quickly attracted lots of members, because obviously in today's world there are lots of people looking for flexible freelance work that pays fairly. Everything was looking good - and then COVID happened.

"It wasn't the right time to start going out to businesses, so we took all of our learnings from the beta phase and concentrated on making the user journeys as slick as possible. After making lots of improvements, we re-released the platform in July. Now it offers a great experience for our paying customers - the businesses."

How have you found selling in the middle of a pandemic?

"We've found that small businesses really buy into That Works For Me when we tell them we have talented people with specific skill sets - here's an amazing social media manager, here's an amazing marketing person, here are some people who can really help with your finance or HR. 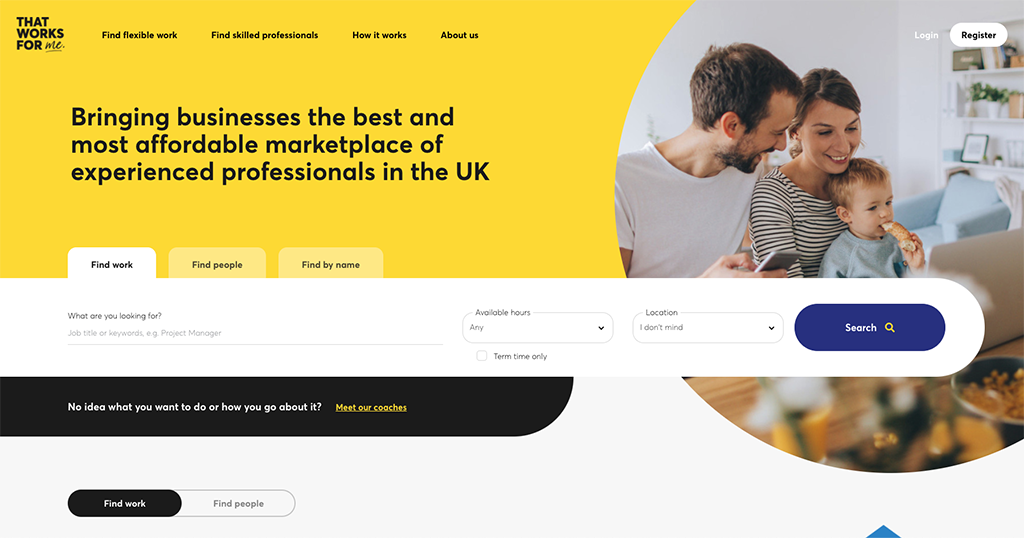 "We've also found that, even if a business wasn't ready to use the platform when we first spoke, they often come back a couple of months later to tell us they're ready. But it is a challenge getting in front of the right people at the right time."

"I think so! We've found about 20 social media managers for people, which is a big total at this stage of our journey. With marketing generally we've had quite a lot of success - there are lots of businesses needing help with things like copywriting and content strategy.

"We've shown that we can be quite agile, too. When COVID hit a lady asked us whether we had any language tutors, and we ended up finding her two. This is something we say to businesses - we can go out and access communities of people they wouldn't necessarily be able to."

Your platform is your product, and you touched on its build earlier. What did you learn from this process?

"If I was to offer one piece of advice, it would be to build something simple, get it working, and then bolt on the other stuff later. What I did was dream up this massive creation before finding a company in India to build it - in three months. It actually took nine, and I got back probably 60 to 70% of what I'd asked for.

"During the build I fell pregnant with my third child, who's obviously now here. So while the platform took longer to get right than it should have done, it didn't matter in the end because it meant I could take a month off to give birth!

"Once we brought the platform onshore, we teamed up with these amazing guys in Leeds, who are now officially part of the business."

That Works For Me could be a real disruptor, couldn't it? Especially if, as looks almost certain now, working patterns permanently shift?

"Because there were recruiter and freelance platforms already, I suppose I didn't feel like we were creating a new concept. Ours was a hybrid thing that sits in the middle and plugs the gap.

"It's interesting, because when you describe That Works For Me as a platform where you can find amazing, experienced UK-based people who happen to be parents, or who have other things going on, you don't quite hit the nail on the head. 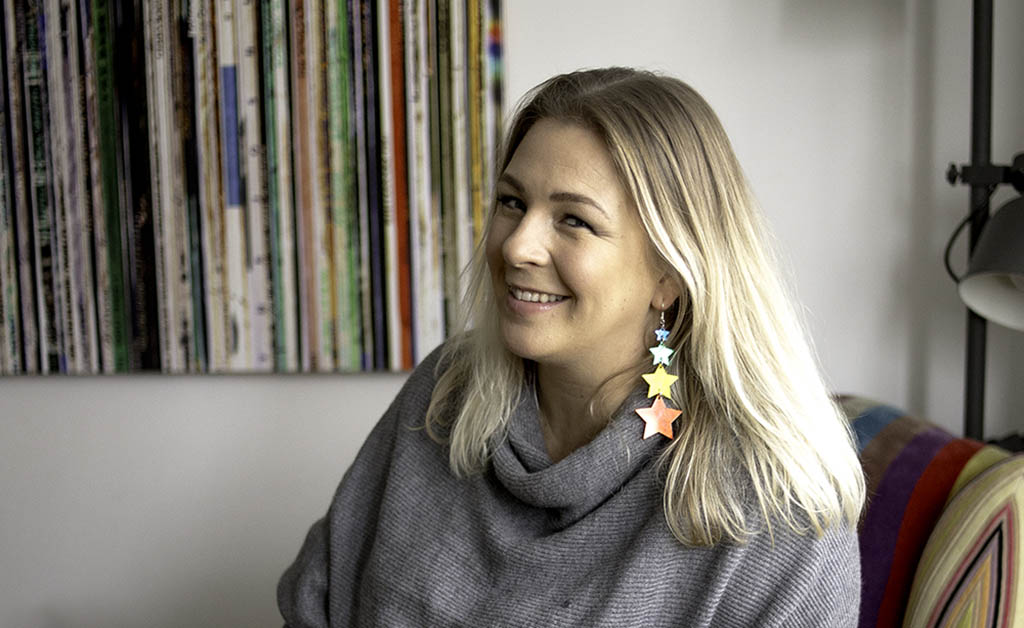 "It's only when you describe the issues - the fact that there are so many people good at what they do, yet they can't find work. And so many small businesses out there that need a bit of help with their social media or Google Analytics, or whatever - that it really lands.

"Now I'll quite happily talk about the future of work and where I think things are going. A great bit of advice I was given was, from day one, you have to be a thought leader in your space - because you're going to have some real explaining to do."

Talk to me about the psychological side of launching a business

"Running a business, I feel like I'm almost permanently in that first six months. I'm having to really try and get comfortable with never being the expert in anything. Everything feels new and challenging.

"I reach out to experts as much as I can, even it's just to validate my own ideas. I'm working a lot with Enterprise Nation adviser Lara Moloney at the moment. Having access to someone else who can turn around and tell you that you're doing the right things; it just gets you more into that second and third six-month period."

"In the female entrepreneurial world, there is very much an ethos of paying it forward. So my bit of advice is to realise this from day one, and then to make sure you're passing it on as you progress through your journey.

"I actually met a couple of people at Festival of Female Entrepreneurs who I'm having calls with over the next few weeks to say 'Hey, if I can help with anything, then I'm here' - because others have done the same for me over the last two years, and it's just been absolutely invaluable."