Learn somethingIan Felton: 'The website we’ve created from Pivot Project funding has enabled more artists to get their stories across'
Member stories

Ian Felton: 'The website we’ve created from Pivot Project funding has enabled more artists to get their stories across'

Ian Felton, owner of the Trinity Art Gallery in Tower Hamlets, faced a major headache during the Covid-19 pandemic in early 2020, as he looked to build his relatively young business' online presence.

However, after successfully applying for a £1,000 Pivot Project grant, Ian revolutionised his business, which is now thriving.

If you own a Tower Hamlets-based business, employ up to 49 people and started trading before 30 June 2021, you're eligible for a Pivot Project grant - so apply now!

Owning an art gallery is undoubtedly a dream for many! How did it come about for you?

“My background was initially in sport and extreme sport. From a young BMX bike rider, then getting into skateboards and then I did a lot of work with skiing and snowboarding. I was funded by UK Sport to sit on the International Federation for Skiing and Snowboarding, and I was also doing a lot of media work.

“I did a lot of television stuff. I got to do the 2002 Winter Olympic Games with the BBC as the snowboarding correspondent, so my whole background was in sport.

“In amongst all of that, over a 20-year period, I got to learn a lot about business through sport. I got to a certain point in time where I was also doing a lot of artwork, a lot of paintings – I’ve got a strong artistic streak in my family; my brother’s a graphic designer, and my sister’s an interior designer.

“We grew up with my dad. He was a technical draughtsman, so we got taught from a young age how to draw. As I was doing more and more creative work, it got to the point where I felt I went as far as I could in sport, and I got offered the opportunity to have a solo exhibition, which I accepted in 2004.

“I thought it was time to grow up and get myself a proper job, so I became an artist! I did this exhibition in 2004, and I can honestly say it's the hardest thing I've ever done. The biggest challenge was not coming from a formal art education background, so I was an outsider artist in that respect,

“The logistical side of things was one thing, but the emotional side and the journey that you take as an artist, what it means to be an artist, is not as tangible. Let's say you're a bricklayer, you get charged for how many bricks you can lay, for example. If you're a doctor, then your job is making people well again. As an artist, a lot of questions were posed - you could argue what I do is absolutely worthless; you can't eat it, you can't wear it, you can't use it for shelter.

“Art plays a different role throughout society and throughout history. It’s one thing adding to society through art, it’s another making a living out of it. I was a complete newbie, I didn't get any formal education in art. 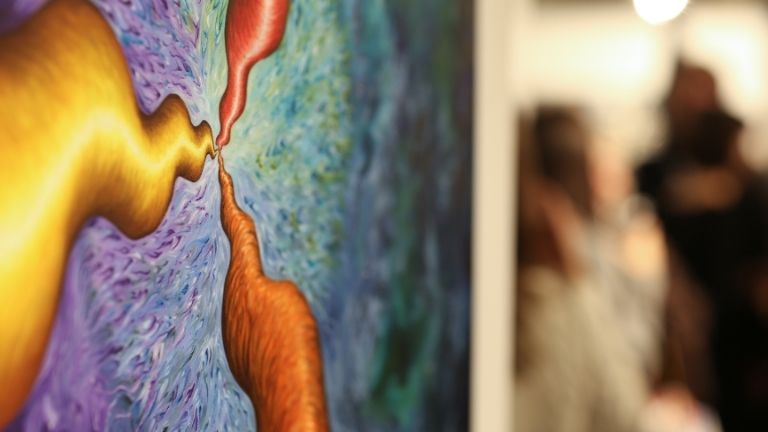 “Rewinding a little further, I rocked up to Greenwich Market, with some paintings under my arm, and asked if I could have a market stall. I got turned away because they were up to their full quota. As I was walking out of the market, tail between my legs, I bumped into an old friend of mine from the snowboarding days, who asked what I was doing, and I mentioned I was trying to make it as an artist.

“After returning the question, he told me he’d become the new market manager at the British Market, and he noticed a gap where they weren’t able to cater for artists hoping to show their work.

“We therefore put our heads together and we come up with something called the Arts Collective. This gave us a space in the car park right next to the arts and crafts market, and we set up this Arts Collective, where we invited artists, painters, sculptors and photographers to show their work on a Saturday and Sunday, and it was phenomenally successful!

“We sold a lot of artwork through this; I remember in the first few months, we sold something like £40,000 worth of artwork from a car park in Greenwich, and we gradually, over a period of time, had hundreds of artists come and join us, and the whole thing was very heavily subsidised.

“That, I suppose, was my early journey into gradually becoming the owner of an arts company and a gallery. I set up art studios at a place called Trinity Buoy Wharf, which is a centre for the arts and creative industries.

“That was 16 years ago and gradually brought that same ethos of working with other artists and inviting other artists to share the space. It made it a lot more affordable for us to have good quality studio space. At the time we were doing a lot of our exhibitions within the studio space, and then we had a huge development called London City Island, and also one called Goodluck Hope, arrive right next door.

“Their managing director came to one of our shows, and then invited us to open up a pop-up gallery at London City Island about four years ago, and then two years ago a second gallery at Goodluck Hope.

“Our challenge, I suppose, is what you do when you've suddenly been gifted with some very, very good exhibition space for a gallery; you’ve got to staff it, you've got to fund putting the shows on, and we rely a lot on other artists all collaborating and working together."

The pandemic was devastating for so many businesses. Talk to me about how the Pivot Project helped fuel your recovery.

“When we opened our second gallery, it was in February 2020, it had to be closed one month later because of the pandemic, and what we realised is that all of our activity up until that point had been through the actual physical gallery. We had a website, but we didn't have an online shop, so we were very low on the radar when it came to an online presence.

“We recognised we were now closed because of the pandemic and these lockdowns, so how do we get ourselves a better online situation? We knew how we wanted to do this, and how we wanted to approach it, but then we also recognised that we needed to put some financial resources into it, of which we didn't have a great amount available. 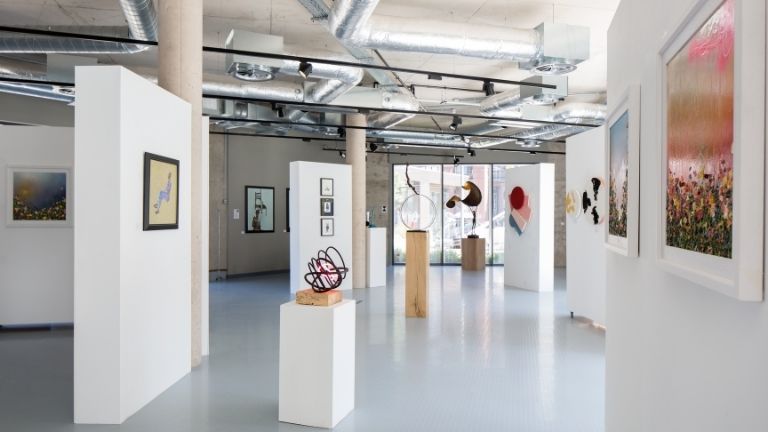 “And then the Pivot Project came along, and I suppose in the grand scheme, it was £1,000, which some might think wasn't a huge amount of money, but crucially, it was money that we could dedicate entirely to one project; we recognised we needed some assistance in a technology sense, so we shopped around and found a very good IT company called Onega, also based in Tower Hamlets, and we told them what we wanted to do.

“They told us how much it would realistically cost, but then they recognised, as an arts organisation, that they could drop that price immediately. I said to them: we've got this Pivot grant, that enables us to pivot our business from being offline, just with galleries, to have an online presence, we've potentially got £1,000 to do this, can you help us? And they agreed.

“We were successful in the grant application and were then able to employ the services of Onega to help us put everything online and change our whole presence, and they gave us a brilliant amount of expertise – way above and beyond the original goal.

“It's meant that our online presence now is very, very good, but it's also helped us hugely offline as well. People come into the gallery and if they are interested in particular artists, we can now show them on one of our screens in the gallery all the other works that are available from this artist, for example.

The reason I am a fan of the Pivot Project and willing to endorse it is because from a relatively modest grant, in some ways, it was able to be very powerful in the way that enabled us to, well, pivot!

“As a young gallery, which has also had to deal with a pandemic, we've been looking at what really is our job. What are we here to do? And one of the things I've discovered in this is we're not about simply selling decorative wall hangings, but we’ve moved into the niche of cultivating relationships and understanding artists and what they need to perpetuate their art practice.

“Obviously they do need financial assistance, but they also benefit from other resources, including things like having an online presence that they can also direct people to, which has their full body of work. The website we’ve created from Pivot Project funding has enabled more artists to get their stories across, and also show and sell their artwork, which in turn brings money, resource and opportunity back to the artist.

“That's one part of our job. The other part is to cultivate relationships with collectors of art - many people don’t really know what they're buying when it comes to original art. They don't know how much to pay for originals, they don't know whether they're getting a good deal.

“It’s become very important for us to also cultivate good relationships with collectors, to inform them about new works and new artists to demonstrate what they're buying, and when you break down the cost to them, they can see the value that you're giving them.

“So that's really our job: cultivating relationships with artists, collectors, clients and the patrons, and putting them together, enabling this exchange and being able to do that electronically through the website is brilliant.

“Pivoting following the pandemic has enabled us to give a service to artists and to collectors.” 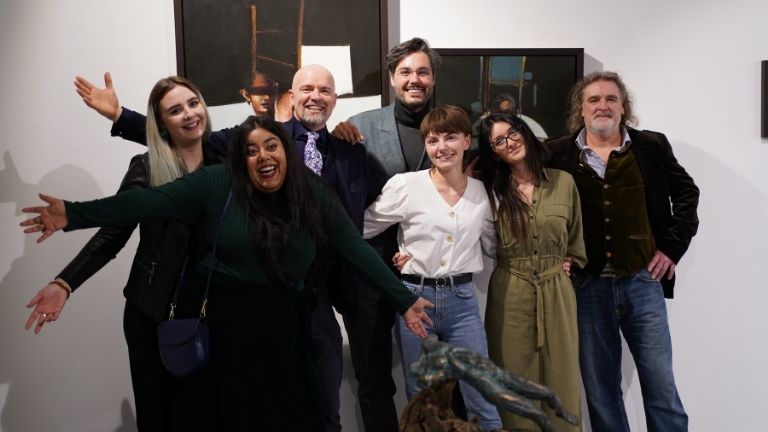 What would you say to businesses based in Tower Hamlets that are successful in their Pivot Project applications?

“I would say dedicate and ring-fence the money for something very specific - if it's buying the services of another organisation to assist you, tell that organisation what you're doing and where the money is from.

“If you're buying and selling certain goods, tools, machinery, tech for it, be very specific with what you're doing with that money.

“I suppose there's some kind of magic about this Pivot Project. It comes from a very good source, the government and local government, looking to really assist small businesses and dedicating this amount of money to as many of them as possible."

Be sure to check out the Trinity Art Gallery to see the fruits of Ian's labours.

Enterprise Nation has once again partnered with the London Borough of Tower Hamlets to offer more funding and support to small businesses in the borough. Find out if you're eligible for the Pivot Project or the Business Adaptation Project.