Learn somethingAn enterprising nation! A third of UK adults are thinking about starting a business in 2023
Insights

An enterprising nation! A third of UK adults are thinking about starting a business in 2023

With household costs soaring, 30% of UK adults are considering starting a business or side hustle in 2023 in a bid to increase their income.

New research from Enterprise Nation found that the figure rises to almost half (48%) amongst young adults aged between 18 and 24 who said they are considering starting a business. That age group alone equates to more than two million individuals with entrepreneurial ambition.

Another 6% said 2023 was too soon, but hoped to start a business at some point in their career.

While recessions often do see more people starting a business because of job insecurity or unemployment, the research found that only 6% said it was because they had lost their job.

However, 33% did say they wanted to start their own business in order to supplement part time work or wages from a zero hours contract, with 43% saying they were worried about paying the bills.

Another third (29%) said they were starting a business to follow their dreams or make money out of a skill or hobby (27%).

The most popular sector to start a new venture in was food and drink, with one in 10 (12%) saying hospitality or food and drink production was their chosen field. Technology was the next most popular business sector (11%) with fashion the most likely business route for young people (13%).

"There is clearly a huge appetite to start a business in the UK. While not everyone is an entrepreneur, many people now see starting up as an accessible way to supplement or take control of their income at a time of higher pressures on personal and family budgets.

"Recessions are well known for motivating people to start-up, but while that’s usually down to unemployment, this time many are planning to start a side-hustle while holding down a full or part-time job.

"We need a healthy pipeline of fresh new businesses to support economic growth, increase innovation and add diversity to the UK’s small business community. We need to be ready to support them to develop the skills they need to thrive."

The research found women were more likely than men to set up a side hustle alongside a current job or caring responsibilities (71%) compared to 45% of men.

Half of those living in Liverpool with entrepreneurial ambition said they were motivated to start-up because they were worried about paying the bills (52%), followed by Bristol and Birmingham (both 49%).

Half of young people (52%) said they would launch as a side hustle, but interestingly that jumps to 60% amongst 45 to 54-year-olds who would start alongside jobs or caring responsibilities.

Access to funding was a worry for those looking to start-up next year and this anxiety was the highest in Cardiff where 38% said it might be more difficult in 2023 compared to an overall average of 29%.

Enterprise Nation's annual StartUp Show takes place in London on 28 January and will see 2,000 people learn how to start and grow a business. Book your ticket here.

Tickets for the first in-person show in two years are being snapped up at a quicker rate than we've seen in previous years.

Mark Morton from Bromley in Kent is set to launch his crowdfunding campaign on Kickstarter on 10 January. The full-time solutions engineer will launch his guided journaling business Journalise as a side hustle.

His business will offer printed books along with techniques to prioritise and improve self-care, and support mental health. His idea is about improving productivity through learning gratitude, meditation and breathing and journaling.

"January is the month when people sit down and think about what they want to do for the rest of the year.

"Spending time writing and thinking away from the laptop is important for mental health and my business will include guided journaling and prompts to practice gratitude and meditation for example." 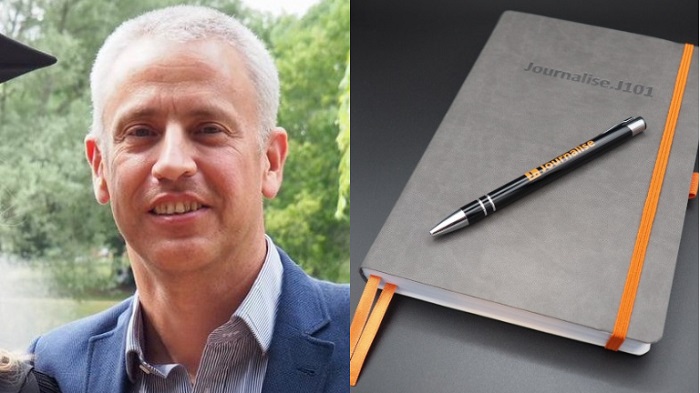 Luisa Charles and Ryan Mcclure met as students on the joint double masters programs at Imperial College and the Royal College of Art. Four months ago they decided to jump straight into entrepreneurship.

Both were adamant they wanted to start a business straight after graduation, rather than go into employment.

"Design saved me. I felt hopeless in the wake of the climate emergency and wanted to do something to help. By understanding how to best equip myself as a design engineer, I was able to find a means of sharing a solution and building a movement through entrepreneurship.

"So I will ask anyone who is having personal battles to ask themselves, how can I design a solution? What if I started a company to tackle the exact issues that riddle me everyday? It’s likely many other people feel the same pain, so any year is a good year to create a start-up - just make sure you make a start and share your story!"

Wateraware Collective aims to create a living map of water quality data in the UK by streamlining data collection through an architecture of low cost, adaptable sensing devices which water hobbyists can use to passively collect data. This will help water companies manage pollution events, fosters new innovation, empowers communities to stay safe, and ultimately enables eco-systems to thrive.

"Launching a product in 2023 is a great for us. We have had a lot of support already and that's been really important for us as we build a business for the longer term. Having that support and finance in place is critical for start-ups as they test, grow and then scale the business.

"It's really rewarding and exciting at the same time. For us it's not about the cost of living crisis at all. It's about having an idea and getting it out there."

Enterprise Nation's annual StartUp Show takes place in London on 28 January and will see 2,000 people learn how to start and grow a business. Book your ticket.