The fastest food company ever to reach its crowdfunding target

Charlie and Harry Thuillier created an ice cream that contains 20% less calories than an apple. Whilst handing out samples in the cafe below his flat, Charlie placed a product in the right hands. A move that led to the brothers claiming the title of being the fastest ever food and drink company to reach its crowdfunding target. They are now firmly focused on growth.

Where did the idea come from, and what is Oppo? 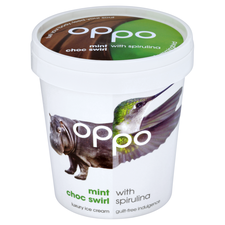 In 2011 I flew to Brazil with Harry my brother to kite buggy 1000km along the North East coast from Natal to Jericoacoara. It's one of the windiest places in the world, we had never done the sport before, and no one had attempted to kite buggy that distance without vehicle support. But we secured sponsorship from equipment companies, raised some money for a homeless charity, and did it anyway.

The adventure wasn't without its mishaps (it turns out Brazil isn't just one long beach), and so we ran out of food. We were burning 8000 calories per day, which meant I lost 8kg in the subsequent 2 weeks. Locals showed us wild foods we could find along the way - coconuts and various fruits ready to be picked. We soon realized these healthy yet indulgent wild foods were much more energizing and nutritious than the processed western food we had previously been carrying. It kept us going through some days we would be walking over thirty miles dragging 75kg buggies through the equatorial heat.

We completed the expedition, and upon our return home I resigned from my job in Sept 2012 to move back home with my parents and see if I could use natural and actively healthy ingredients to make the most indulgent desserts. Healthy indulgence.

Oppo is very low calorie (less than 85 per 2 scoop serving), all-natural, and no added sugar. With 20% less calories than an apple, and 1/3 less sugars. Oppo is a real step change from what other ice cream companies are offering - true innovation meeting demands of current consumer trends.

Why did you opt for crowdfunding to raising funds? 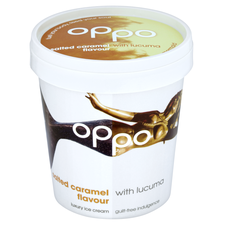 We received very good offers from venture capitalists, however it just didn't quite feel right, so I rejected them. We were desperate for money though. In a feat of opportune serendipity I was giving out free samples in a cafÃ© beneath my flat when I met a lady who asked for some more. Unknown to me she took them home to her husband who turned out to be the CEO of Seedrs crowdfunding company and kindly got in touch.

We decided crowdfunding with Seedrs was not only fantastic opportunity to raise funds but also raise awareness of Oppo. Something truly realized when we ended up becoming the fastest ever food/drink company globally to reach target through crowdfunding, and the most overfunded campaign Seedrs have ever had. We now have 197 investors through Seedrs, which is a network of 197 people we can now call on for support and help to grow Oppo. It is no small task to manage this quantity of investors, but luckily Seedrs facilitate this process.

What preparation was required prior to launching the campaign?

Lots! We had to draw up the company's first business plan, value the business, prepare financial forecasting and projections to many potential investors, and of course film a video. Not to mention draw up marketing plans to raise awareness of the campaign itself - unfortunately something we weren't ever able to put into place as we reached our target within a few minutes!

We've written a blog on how to successfully launch a crowdfunding campaign should anyone be interested.

Did you need the funds to get stocked in Waitrose and Ocado or did that order come first?

We had been selling in Waitrose and Ocado for 3 months before we went live on Seedrs. This was essential to prove Oppo was more than just an idea. If you are a food company that isn't available to the public yet I would recommend you stay away from equity crowdfunding in preference of seed money, StartUp Loans, or other forms of crowdfunding. It can be too expensive otherwise.

What are your plans for growth over the next 12 months?

Oppo is right at the beginning of a journey - however we have already won most innovative product of 2014 at Lunch, won a packaging design award, achieved the above crowdfunding records, grown from 1 person in October 2014 to 6 today, and The Guardian have recently named us as Final 3 in their ongoing Start Up of the Year competition.

Meet Charlie and hear more at The Food Exchange on 30th April in Central London.

**By attending The Food Exchange, you will benefit from a wealth of inspirational and practical business advice from talented food and retail experts - including an opportunity to pitch your produce to top retail buyers! ** View agenda here and book tickets: