Learn somethingSocial media photography: How the rule of thirds can boost your visual content
Blog

Social media photography: How the rule of thirds can boost your visual content

Ever heard of the rule of thirds? If you're a photography fan, the chances are you know all about this rule. If it's completely new to you, you might well find that this handy little concept takes your social media imagery to the next level. And with no extra energy or effort!

The rule of thirds is a useful part of your social media toolkit as it can really help to transform an image into something a lot more visually interesting. It isn't always the case, so the best thing to do is experiment.

Next time you take photos for your social media, play around with the composition aspects using the rule of thirds and see what you think. You never know, it might be a game-changer!

Read on to learn more about what the rule of thirds is, how to apply it to the photographs you take, and how to take advantage of it in your social media posts and content.

What is the rule of thirds?

The rule of thirds is a clever tool that helps us better frame photographs and make them really stand out from the crowd. Imagine a grid over an image that essentially breaks the image into nine equally-sized boxes. Two lines cross the image horizontally and two cross it vertically. 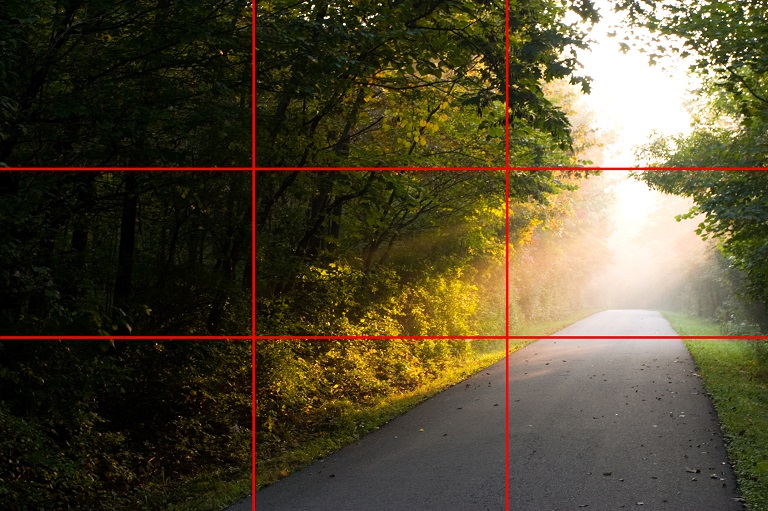 When you have your grid in place (either in your mind or through your phone camera), look to align the subject of the image with a point where the lines cross. There will be two of these on the left of the image and two on the right.

It's said that if we align the main subject of the image – a person, an object, an animal or anything else – with this cross, the image looks better from a compositional point of view and makes more of a visual impact.

How can I get a rule of thirds grid on my phone?

Depending on the type of phone you have, the chances are you might be able to get these lines as a pale overlay for every image you take.

Here's how to get a rule of thirds grid on your smartphone camera. When you open your Camera app, the lines will be there, ready to use should you need them.

Rule of thirds gridlines on iPhone

Rule of thirds gridlines on Android

What if my image's subject doesn't fit on an intersection?

When using the rule of thirds, you can also opt to just follow one of the lines if you want to. If you're photographing something long or tall, this can work well.

Does the rule of thirds work with videos on social media too?

Yes, it does – in fact, it can make your videos a lot more interesting. It sounds strange when you say moving the subject of a video can make something more appealing to watch, but if we're looking to give our content the best chance of success, it's worth throwing everything at it!

What if the rule of thirds doesn't improve my image or video?

I've been studying this concept for a while and often apply it to my own images, but I also abandon the rule when needed. There are times when a subject placed in the centre of the image works better.

Maybe the symmetry of the image looks best that way, or the other elements of the image lurking in the background mean the image lends itself to a different way of framing it.

Use the rule to see if it'll improve what you're posting and sharing, but also don't be afraid to do something else if it's not really working for you.

Can I use the rule of thirds to edit an image I've already taken?

Yes, you can experiment with the rule of thirds when it comes to the editing process too. How you do this depends on the type of smartphone you have.

Editing an image on iPhone

Editing an image on Android

The lines will appear on the image and the grid will be there for you to experiment with.

Enterprise Nation is working with Meta to support women across the UK in growing their businesses online.

Our accredited #SheMeansBusiness trainers will tell you how to best use Meta and the Meta family of apps to grow your business.

To meet the trainers and sign up for events and courses, visit our #SheMeansBusiness page.

Rhea Freeman
Rhea Freeman - Social . Media. Marketing
I help small businesses, solopreneurs and influencers promote themselves better with little to no budget. And as you'd guess, most of this is done around social media and digital. I usually work with female founded business and most of the brands I support tend to have a rural connection, from being located there to serving there. I also run two Facebook groups, one of which is a membership group, to provide people who want upskill with additional support. In addition, I love speaking at events where I can help people get enthused and grow their confidence around social media, the power of digital, and how they have everything they need to get started. I'm also an award winning PR adviser, best selling author and two x TEDx Speaker.