When we put a call out to small businesses to share how they are raising money for the people of Ukraine who have been devastated by the Russian invasion, we were inundated with responses. Here's a selection of the brilliant efforts by the UK's fabulous entrepreneurs. We salute you all! Please support them if you can.

Olga Line is a Ukrainian woman who moved to the UK in 2020. She set up the William West of Eton candle business in a building where candles have been made since 1661.

With her parents, siblings, aunts, uncles and cousins still in Kyiv, she wanted to do something to help. Olga has produced the Flame of Freedom candle. All proceeds go to help people in Ukraine through UNICEF. More than £300,000 has been raised so far. 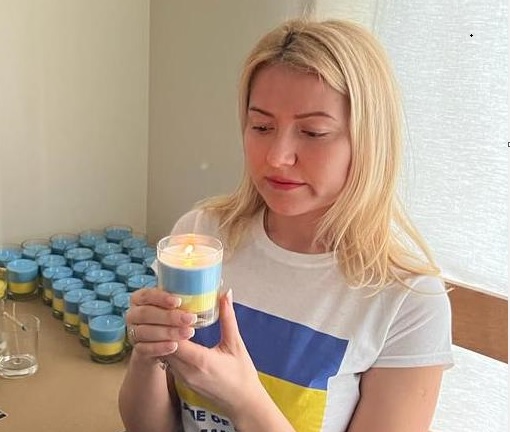 For The Love Of The North and The Stationery Society

Whitley Bay based For The Love Of The North and The Stationery Society have launched a special stationery gift box entitled ‘Hope’, to support The British Red Cross’ Ukraine Humanitarian Appeal, with 100% of profits donated directly to the charity.

The box includes original and exclusive cards, postcards, notebook, notepad and a few surprises created by talented artists from around the UK. 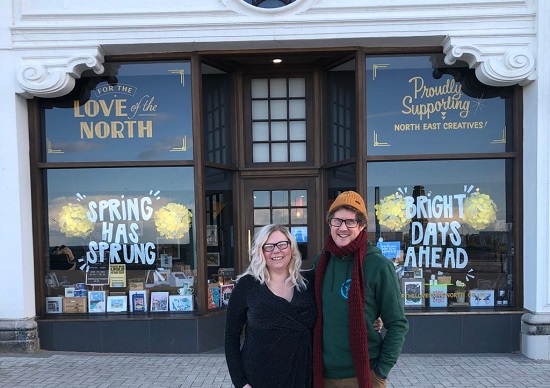 Natural and organic period and bladder care products business Freda is donating period products to Ukraine. You can donate here with £15 covering the cost of 100 pads.

You'll probably recognise Elizabeth McKenna as the "bonkers" florist from series 13 of The Apprentice. She has established the Sunflower for Ukraine Mother's Day appeal which is encouraging people to donate £1 for the mothers of Ukraine. 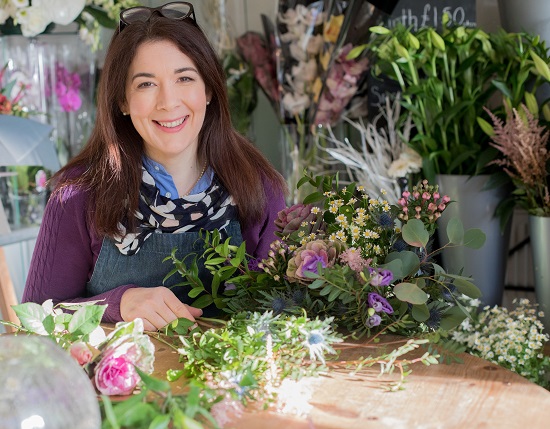 Abigail is a best-selling author and founder of Authors&Co. She has donated money to Ukraine and also decided to put pen to paper. Her ‘War Teddies' poem has been translated into Ukrainian and is being sent with teddies to children fleeing the warzone.

"Every time I was watching the news and seeing a child in Ukraine holding a bear or soft toy, my heart ached knowing which bears my own children would choose, should we ever have to flee our homes," Abigail said.

"Every little person crossing a border, sleeping in an underground shelter or trying to survive this war, is holding and hugging their special teddies, so I wrote a poem for them, in the words of their bears." 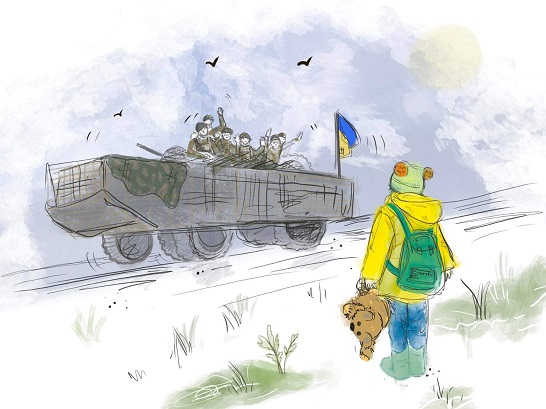 The colouring in sheet depicts a woman wearing a traditional Ukrainian floral headdress.

#CookForUkraine is an industry initiative started by London chefs Clerkenwell Boy, Alissa Timonivska and Olia Hercules with funds to be distributed through UNICEF to assist embattled communities in Ukraine.

Led by The Ethicurean Restaurant, Bristol's food and hospitality industry has joined forces to raise money by donating some fabulous prizes including a Carpathian Cookery Class from Papadeli co-founder and Enterprise Nation member Catrin McDonnell.

You can buy a raffle ticket through experiences marketplace Yuup. The draw closes on 24 March. 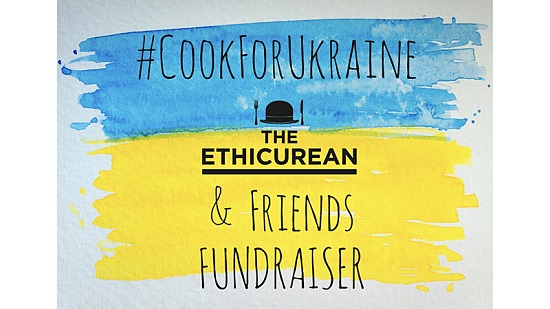 The Packed With Hope campaign, led by publishers Little Toller and Bluemoose Books, is raising £75,000 to help the children of Ukraine.

The money will be used to fill 10,000 backpacks with a selection of items that are both comforting and essential, such as books, head torches, notepads, colouring pencils, toothbrushes, puzzles, playing cards, activity books, bags of marbles, hot water bottles, socks, hats and scarfs, reusable drinking bottles, and many other much-needed things.

At the time of publishing just over £63,000 had been raised. You can donate here. 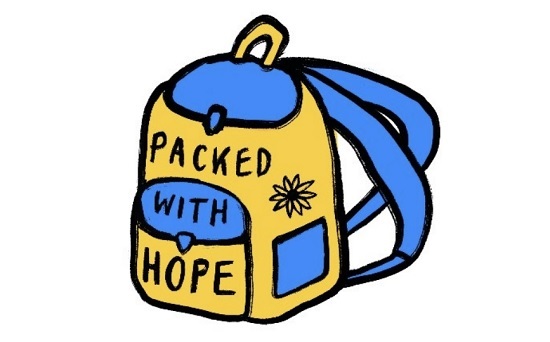 Salisbury shop Casa Fina is selling sunflowers to raise money for the people of Ukraine.

We are selling sunflowers 🌻 to raise money for the @decappeal for #Ukraine 🇺🇦All proceeds go to the appeal £3.99 each #salisbury pic.twitter.com/k8MnUius4x

Every year, Gary Anderson, co-founder of Secure Mind Solutions, raises money for charity in memory of his daughters, Alana and Dana.

In 2022, he is supporting UNICEF by walking the Cleveland Way, a 110 mile trail in North Yorkshire. The money raised will go to the Ukraine appeal. You can donate here.

Wokingham brewery Siren Craft Brew has re-brewed a beer it originally produced with Ukranian company Varvar Brew in 2018. This time, 100% of sales go to the Red Cross.

The beer is called MAVKA and its name can be traced back through Ukrainian mythology. The inspiration for the beer was a recipe mashup between Siren's ‘Shattered Dream’ and Varvar’s ‘Caribbean Dream’ porter. Find out more here. More than £13,000 has been raised so far. 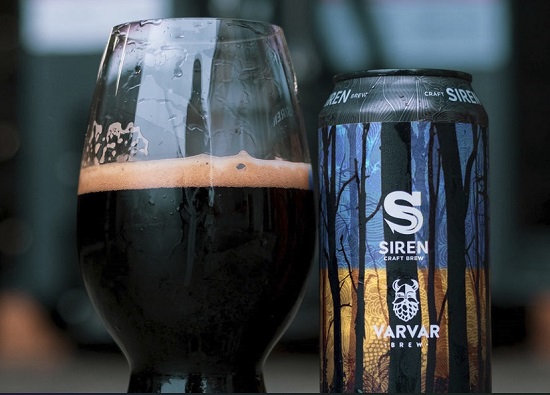 The products are part of the business' wider Bubbles Not Bombs campaign to support children in orphanages and refugee camps across the world.

Did you know our #BubblesNotBombs t-shirts come in children's sizes? We have been deeply moved by all of your orders. Keep them coming, and together we will make a difference.https://t.co/GsVW7WMR9i pic.twitter.com/V15Ol1f9pC

Little Wild Co. and Something a Bit Different

A group of 40 female founded businesses have come together to organise a mum and baby small business raffle with prizes worth £1,200.

Tickets are £1 each and can be purchased here. The raffle ends on 26 March with the draw taking place on Mother's Day, 27 March.

We were told about the raffle by Rhian Thompson, founder of baby clothes brand Bibevie, who has donated a prize.

Organised by The Two Lauras, social media experts have come together to produce 114 bite-sized social media marketing videos. Each video contains a top tip, tactic or strategy to help you get better at social media.

You can access the videos by making a donation with all proceeds going to the Save the Children Ukraine Appeal and War Child. 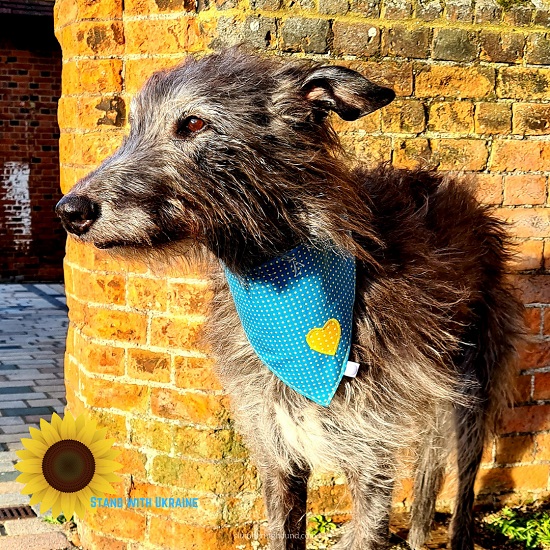 Jenny Guertin, founder of jewellery company Sharkie & Bear, is selling Ukraine flag studs with £4 from the sale of each pair going to Action Against Hunger as part of the Ukraine Emergency Appeal. The remaining £4 is to cover payment charges, materials, postage and packing.

Greg Wixted from Britain Loves Baking has created a 'Chocolate Love Bunny Kit' for £12.50 with £5 going to UNICEF.

Our team wanted to help the children suffering from the conflict in Ukraine. So we came up with this amazing idea. Our Love & Peace Bunny Making Kit. For £12.50, everything you need is in the box, including delivery and £5 donation to Unicef Ukraine Fund https://t.co/1UzO3ia1Sa pic.twitter.com/joCf66EJIN

You can see all the prizes, authors and illustrators on Instagram and enter the raffle here. It closes on 24 March. 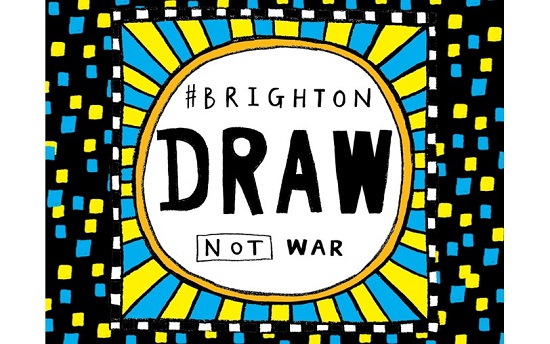 606 Distribution, in association with the BFI, has launched charity screenings of Olga at cinemas across the UK with a proportion of the proceeds going to the Disasters Emergency Committee. Olga is the story of 15-year-old Ukrainian gymnast exiled in Switzerland, who tries to secure place at the country's National Sports Center.

Pat Kelman, founder of 606 Distribtion, said: "When I saw the film Olga debut last year at Cannes, I fell in love with the story. I knew this film had to be seen, and this story had to be told. To be able to support those in Ukraine who are suffering right now as the war rages is an absolute honour." 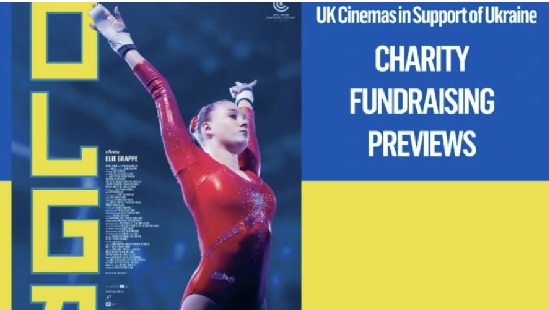 Artist Leila Vibert Stokes is donating 70% of the proceeds from sales of her 'PEACE' art print to the Red Cross.

She says: "Inspired by the surreal beauty of antique paintings and full of symbols of peace like Doves, Olive branches and White poppies, as well as Sunflowers and a nightingale, national symbols fo the Ukraine, this majestic botanical print will lift your spirits every morning."

Shared Harmonies, which provides singing and development services for companies and communities, is asking people to come together to support Ukraine by helping to creating a song filled with messages of love and hope.

People are asked to share what they would like to say to people impacted and the contributions will be used to create a song. Once created, people will be invited to learn the song and submit videos of themselves singing it.

The song will then be available for download with the funds raised split between charities supporting families affected by war in Ukraine, Yemen and Afghanistan.

You can join in via Facebook or email admin@sharedharmonies.co.uk to get involved. You can also make a donation here.

It has never felt more important to raise the vibrations of #love, #connection & #hope. We are launching 'Harmony of Hope'. We want you to help us create a new song & raise funds for those impacted by current events. Check our FB page for more details. pic.twitter.com/5rnYTHaOr2

The following businesses have donated or are raising money for Ukraine with the help of Work for Good: