The competition – run by Enterprise Nation, Adobe and JCDecaux – was set up to unleash small businesses' creativity and help them update their brand identity and reach more customers.

The winning entries were all designed using the Adobe Express app and will feature on JCDecaux's prominent digital billboards, bus shelters and landmark buildings for two weeks from 22 August to 5 September, reaching up to 10 million people nationwide.

Here are the 10 small businesses whose designs particularly wowed the judging panel.

An ethical and sustainable boy's fashion brand based in Leicester. Boy Wonder makes its clothes are made using organic cotton and chemical-free dyes, and come with handy repair kits and care guides to make them last as long as possible.

Founder Ismay Mummery created an advert that uses an image of her son wearing her fish-and-chips T-shirt design. Ismay says:

"I can't quite believe I've won. I guess it'll become real when I see the advert live on the billboards.

"I really hope it'll get people thinking about how to repair clothes instead of discarding them and always buying new. I'm a fashion designer mum with a drive to create a better world for my son.

"He's the muse and model behind the brand, and as a teenager now he's rather horrified at the thought of his face being all over the country!" 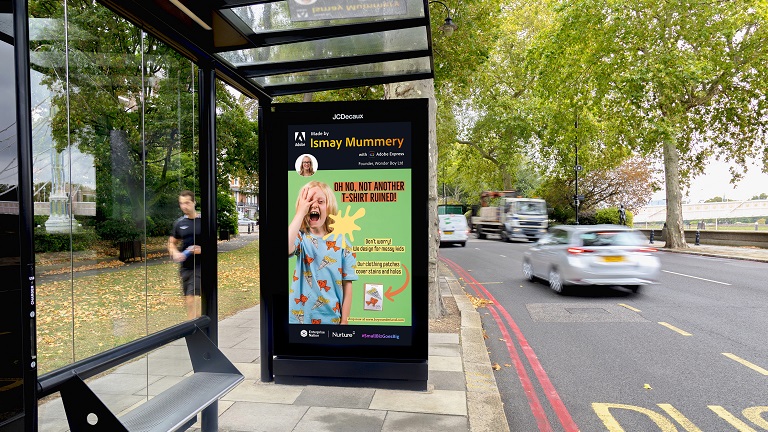 Nottingham-based Doji offers a transparent and convenient platform where people can buy and sell everyday tech goods. 'E-waste' is the world's fastest-growing domestic environmental problem. Extending the lifespan of smartphones and other electronic devices by just one year can save as much carbon emissions as taking two million cars off the road each year.

"We hope our advert will raise awareness of the brand and challenge how people perceive used tech devices: they shouldn't be forgotten in a drawer, they should be reused or recycled!

"At Doji, we're not just driving sustainability, we're also breaking the cycle of consumers facing hassle and basically getting ripped off on other platforms." 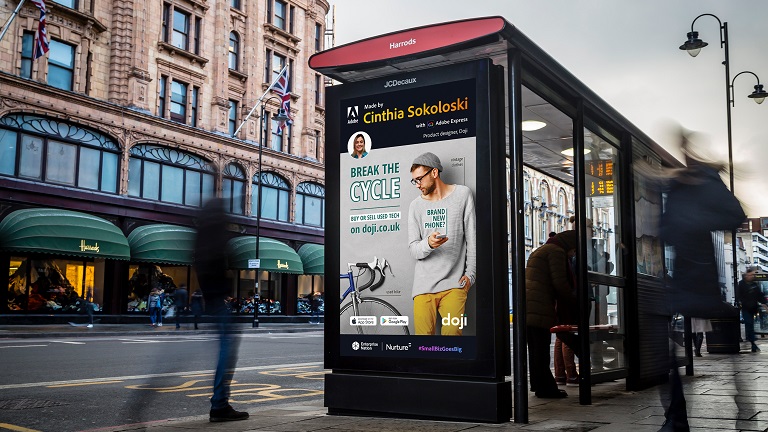 Insane Grain makes nutritious snacks that go beyond the standard health benefits of being gluten-free and low-calorie. Its range has gut-health benefits, more than 50% less fat than average crisps, and vitamin B12.

The London company's mission is to help reduce childhood obesity in the UK by making it easier for people to find healthy snacks that are low in fat, sugar and salt. Already stocked in ASDA, Co-op, Ocado and a number of health stores, Insane Grain is now valued at £3 million.

"My designer left just before we launched our new range. I'm not creative at all, but I thought I'd try Adobe Express and found it really simple and intuitive.

"I was surprised I was able to create the ad all on my own. I couldn't believe I'd won a design competition when design is definitely not my forte!" 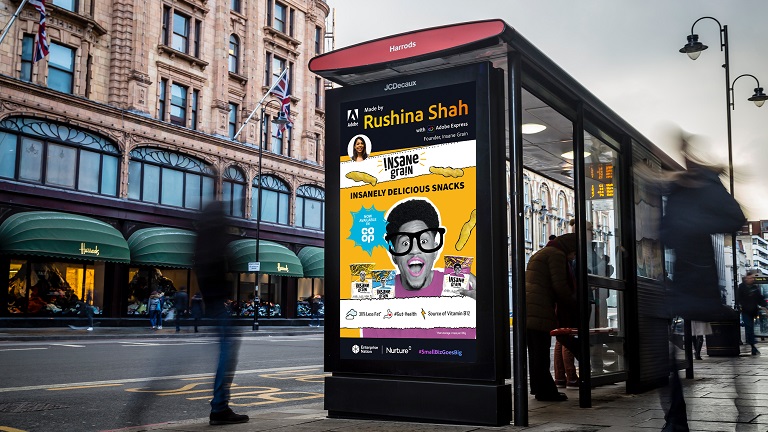 Launched in 2013, Martha Brook is the online home of personalised stationery. It started with just one girl, Martha Keith, and a printer. A Cambridge science graduate, Martha was working as a business director at a large healthcare company, but decided to quit to pursue her lifelong dream of running a stationery business.

She started Martha Brook alone in her bedroom with no investment, fuelled by a desire to create inspiring paper goods that would change people's lives. Nine years later, the London-based business is thriving and has a seven-figure turnover.

Martha and colleagues brainstormed how the advert should look, before graphic designer Lucy Beckett got to work. Martha says:

"In our advert, we wanted to get across the essence of what Martha Brook is about – beautiful personalised paper goods that genuinely inspire, uplift and empower.

"We hope the advert will help as many people as possible to come to our website and discover more about what we do. We love welcoming fellow stationery lovers into our community." 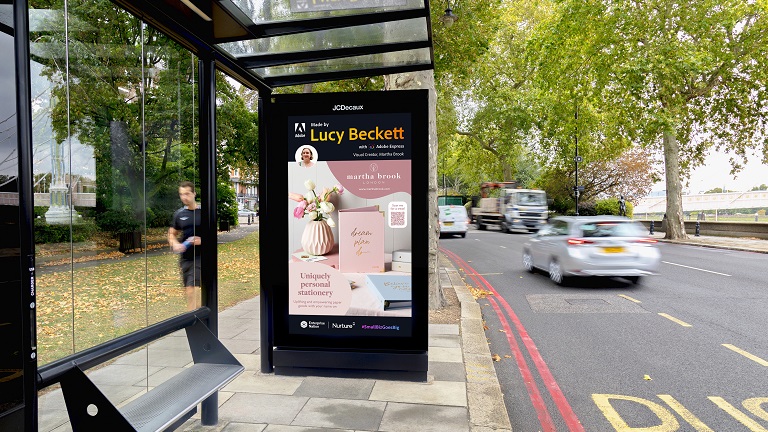 Since launching, Phomo has received rave reviews in major publications, won two Great Taste Awards and secured over £300,000 in investment.

"I don't have a background in design so I thought I'd have no chance. As a growing e-commerce business, it's really hard to get in front of customers and we're really grateful to Adobe, JCDecaux and Enterprise Nation for giving us this chance.

"I tried to convey our key messages, beside a mouth-watering photo that would cause consumers walking past the billboards to get hungry. It's my mission to bring Vietnamese food to people across the country, so this is a brilliant way to increase brand awareness and make sure no one gets FOMO (but everyone gets Phomo!)." 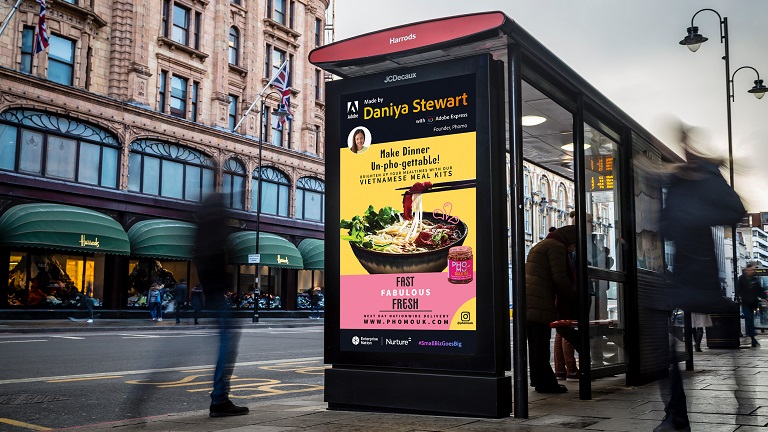 Her winning design for her brand's advert features the bright cushions she designed herself and sells through her online shop. Veronica says:

"With my new-found energy, I felt it was time to give my business and my creative dreams another go. After months of hard work, I launched my shop and, to my surprise, nearly sold out in the first week.

"When I got the phone call to say I'd won, I didn't think it was real. My teenage son was next to me when it happened, and I put the phone on speaker so he could hear the news. We couldn’t stop giggling. The news didn't sink in for days!" 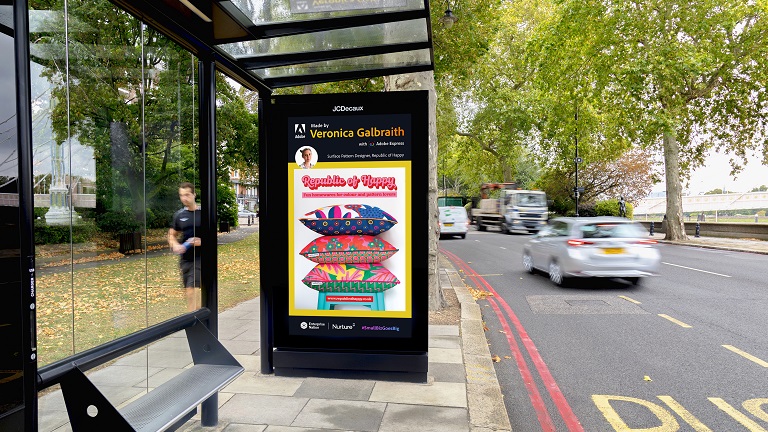 Designed by two sleep-deprived dads in Bristol, Rockit is baby-rocker sleep-aid technology that has won two Queen's Awards for Enterprise in innovation and international trade.

Co-founded in 2016 by Matt Dyson and brother-in-law Nick Webb, the brand has now sold over 300,000 units worldwide and has developed its product range to include vibration sleep soothers for cots and cribs, and a miniature rechargeable soothing sound machine.

"The concept for the advertising design came pretty quickly, as I wanted to link the idea of infant sleep with the space-themed branding we use at Rockit.

"For the photography, I used a shot of our friend Rob on the seawall at Portishead, where the Rockit was invented. I used Adobe Express for the first time when designing the ad and was impressed by its features. Our target market are busy mums and dads, so making the call to action quick and easy was important." 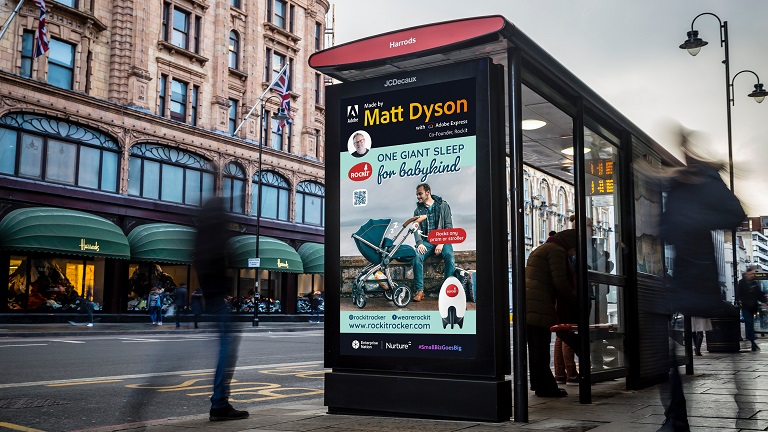 Tiwani Heritage is a sustainable, plant-based hair extensions brand that emphasises natural afro and curly hair textures, empowering women of colour to be authentically themselves.

Founded by childhood friends Lola Cawood and Carol Lathbridge in London in 2020, the company has a unique reward-based recycling scheme that allows customers to send their used synthetic hair extensions for recycling. That helps reduce the estimated 21,000 tonnes of synthetic hair that ends up in UK landfills every year, taking 500 years to biodegrade.

"By creating our recycling scheme and now launching our plant-based hair, we're doing something that hasn't been done in the UK before. As a result, it's been a journey of trial and error, with many hurdles to overcome.

"Building awareness of the environmental impact of synthetic hair is an ongoing challenge and that's why we're so thrilled to be one of the winners of this incredible competition. It allows us to spread this important message with nationwide publicity!" 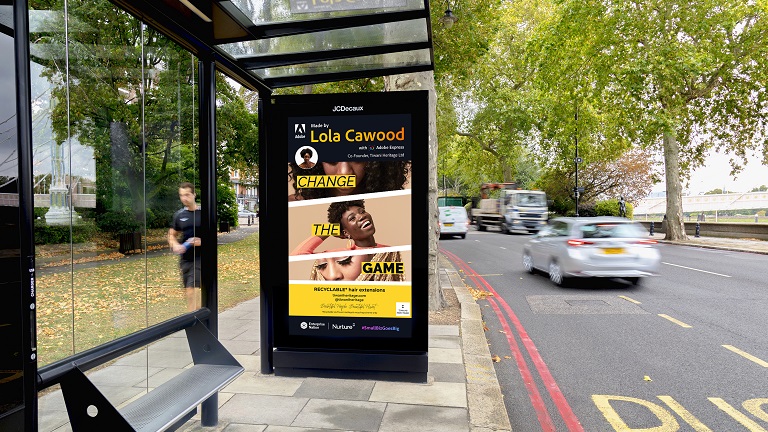 Created by swimming teacher Michael Harkins in 2015, the Stirling firm started trading in 2019, with its unique and innovative range of products that help children learn to swim, safely.

By offering products that prioritise fun and make learning to swim much simpler, Turtle Pack encourages kids – and parents – to spend more time in the water. In 2021, the company partnered with Nickelodeon to create an official Teenage Mutant Ninja Turtles Swim Float, combining the firm's swimming knowledge with one of the most iconic brands of all time.

"I wanted to create an advert that would demonstrate how fun and cool our product is, but without coming across as finger-wagging or guilting parents into buying something – they get enough of that as it is!

"Adobe Express is incredibly easy to use – it has an extremely intuitive interface, so the only real limit is your imagination. I'd love for the billboards to make people aware of all the amazing work the Turtle Pack team have done, both in helping kids learn to swim but also in terms of the resilience it takes to run a small business." 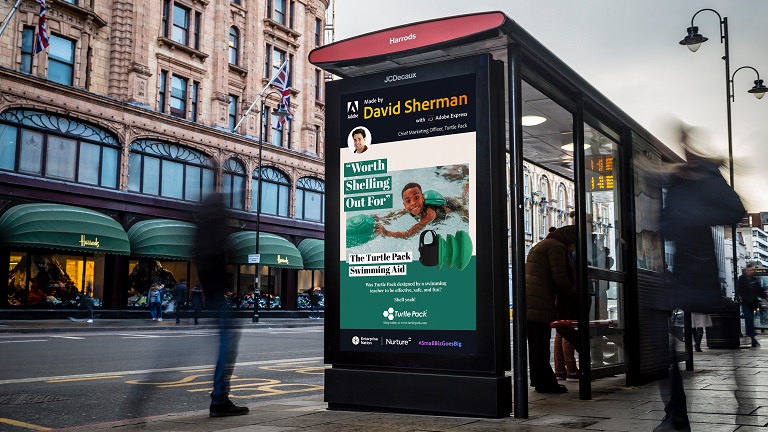 Wallaroo is an Oxfordshire-based producer that works with small community farms in Africa to deliver sustainably grown tropical fruit snacks. Rated as some of the best-tasting single-ingredient dried fruit snacks currently on the market, all Wallaroo products are organic, naturally vegan, and come in environmentally friendly paper packaging.

Founder Abhisek Kanoi, who launched the brand in 2018, says:

"As parents with busy lives, we've often struggled to find food options that appeal to our daughter. We began Wallaroo with this very quest to create food that could come in a packet, was tasty and appealing to growing children, yet also nutritious and safe.

"We knew the advert would have to be visually striking to get passers-by to notice. Our goal was to create something that jumped out at you, yet was clean with simple messaging.

"As a small company, we focus most of our resources on creating the best product possible. There's little left for marketing so we rely on word-of-mouth. This campaign will – we hope – allow more people to discover Wallaroo and hopefully give the products a go!" 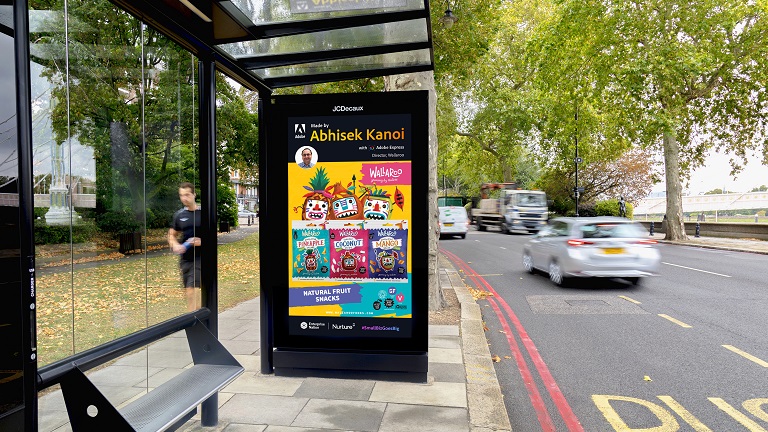