Meet the dog toy brand with a canine chief tester

Sara Burney
The Bark Side Limited

Getting ready to welcome a new dog into their lives, Sara Burney and her family couldn't find businesses that offered assurances as to how good their dog toys were. So they decided that the family dog, Brutus, could help by trying out toys and then only stock those that pass his rigorous testing. With that idea, The Bark Side was born.

Sara, who runs the company alongside her day job as a solicitor, shares her inspiring story and how the Amazon Small Business Accelerator has boosted her entrepreneurial skills.

How did you come up with the idea for the business?

My business partners are my parents. They are both retired and I'd like to be able to give them a bit of a side income, but we're not at that stage yet. We each contributed to the initial set-up costs and we discuss most of the strategic planning for the business.

We did loads of research as we were setting up, found a local wholesaler and created an account. Our first mistake was assuming that we had an eye for what would be good enough to pass Brutus' testing. Wholesalers have minimum order values so when we placed our first order we bought five of everything we liked the look of. It turned out that even with his tiny puppy teeth he managed to do some serious damage to some of the toys, which meant that five of each of those toys went in the bin!

We've since adapted our strategy so that we either obtain a sample from a manufacturer (we now have direct accounts with several of them), or if that's not possible, we buy an item at full price from another retailer and give it to Brutus to test. Only after that stage do we place a proper order with the appropriate supplier.

In terms of the website, I set it up myself by trial and error. It wasn't my wisest move, but we don't have the funds for a bespoke website. I initially built it using Squarespace, but it wasn't suited to me. We'd decided to take payments via iZettle, so it then became easier to build a website around a shop created on iZettle than it was to build a website in Squarespace and then create a shop.

What were your key start-up challenges and how did you overcome them?

Getting known has been the biggest challenge, especially during 2020 when events were cancelled and we couldn't have stalls. We've concentrated instead on improving the website, creating a Facebook group, and raising our profile on social media.

Brutus is the face and voice of the business. He writes in the first person (in fact, I'm lucky he's allowed me to say this myself) and his photo is everywhere. We have Facebook, Instagram and Twitter. I must confess that I'm not really a fan of Instagram and it does get rather neglected if I'm honest. Facebook seems to be working better, possibly because I invited friends to like the page, then of course they invited other friends, and it progressed from there.

I've found Twitter quite difficult to get into but I'll sometimes join in with relevant Twitter Hours, and in fact The Bark Side somehow came to the attention of a podcaster who has a podcast mascot - a Lhasa Apso named Bodhi. They messaged to ask if we'd be interested in being the official sponsor of Bodhi, who himself has his own following, because they'd looked at our Twitter account and website and liked what it was all about. We now retweet each other's stuff, and we've gained some additional followers as a result.

Over the summer, I set up a Facebook group called The Barkeasy, a canine take on the speakeasy, with a friend who runs the daycare centre that Brutus attends. The primary purpose of the group is to give people the opportunity to get to know each of us and what we do, because as they say, "people buy from people".

My motivation for The Barkeasy was to ensure that it was a place for people who just want their dogs to have an awesome life. People can post photos, memes, videos, ask for assistance with a behaviour or training issue, feeding issues etc. My friend, Grace, who runs The Barkeasy with me, is a canine psychologist so she can answer questions, and she can shut down discussions if a training or behaviour conversation is going in the wrong direction. It's now reached the stage where if someone mentions toys, then they'll automatically think of The Bark Side, and if it's about training then they'll think of Grace's business.

What tips have you picked up from the Amazon Small Business Accelerator e-learning programme?

The main videos I've watched are about SEO. I'd liken my website to an invisible shop, like something out of Harry Potter: if you don't know the exact location and password, you'll never see it. I want to get the SEO right before I start spending money on PPC, otherwise I might as well set fire to £20 notes.

It might sound a bit strange, but I also watched the videos dealing with the initial building of your website, even though The Bark Side already had a website. I wanted to make sure it didn't have any glaring errors or omissions.

I've also watched the video about Google Analytics because that, to me, really is a dark art. I'll re-watch it in due course by way of revision, before I start watching the pay-per-click advertising and paid social media videos. 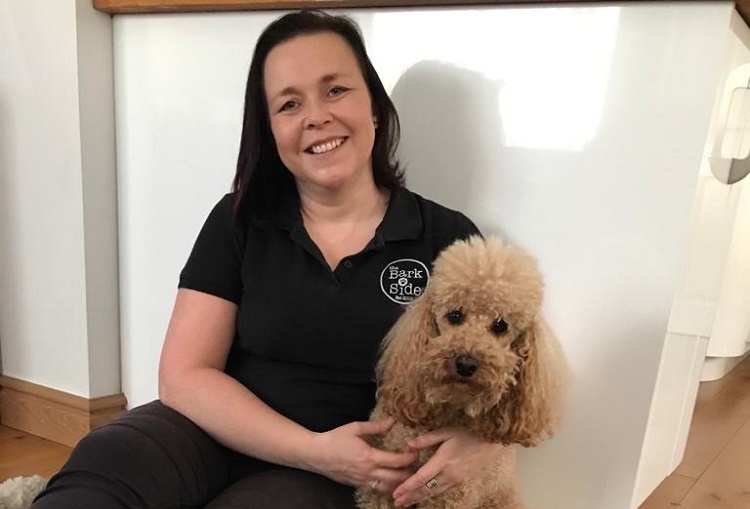 How do you manage running your side hustle alongside your full-time job?

I'm a solicitor by day, and as you'll appreciate, that comes with its own pressures and challenges. That said, some of my skills are transferrable, and that makes my work for The Bark Side much easier. I am an incredibly fast worker, and I have to be a bit of a wordsmith in my career, so you won't believe how quickly I can knock out a blog post or a piece of social media content!

Our first year was 2019 and the main thing I enjoyed was having a stall at weekend events. My dad and I would set up our gazebo and we loved meeting customers. There was a clear demarcation between the day job and The Bark Side during 2019, because we spent evenings planning our stall, and weekends attending the events.

Of course, 2020 has been entirely different, and I've been working from home since March. As a result, there isn't such a clear separation of work, but it has given me the chance to nip out to post orders during the day.

I really miss the events though, and we had big plans for this year. Our flagship event was going to be the National Pet Show at the NEC in Birmingham. Unfortunately, it was cancelled in 2020, but we'll be there in 2021; we're looking on the bright side and hoping it means we'll have an even better stall than we would have, because we've had longer to plan it.

Which other entrepreneurs inspire you and why?

We're a family of fans of The Apprentice, so whilst Lord Sugar is a huge inspiration, it's also great to see the newer entrepreneurs coming through the ranks. Tom Skinner from the 2019 series is on Twitter and he's amazing! His company is thriving (he sells mattresses and pillows). He was always going to go far, but it's still incredible to see how much he's achieved.

On a more local level, I greatly admire Todd and Jo who run Spaghetti Agency in Warwick. They've built it from absolutely nothing. They are really supportive towards people like me, and their advice has been invaluable. They took a gamble when they set up, and it's more than paid off; they're the go-to people for advice as well as campaign strategy and management.

What are your tips for business success?

Go to as many events and networking meetings as you can, whether they're online or face to face. Get your name out there, become known, but also keep learning.

I hadn't done any networking before the pandemic, and in fact I didn't know the value of it. In my defence, I also didn't have time for it, as I'm still employed full-time. However, lockdown brought with it so many pivots, one of the main ones being that networking went virtual, which meant I could attend them after all. One of the main issues for me was the travelling time, so the fact that I didn't have to move from my desk was perfect.

As a result of some of the networking events, The Bark Side has received orders. In fact, on a few occasions, people have placed an order via the website while I've been talking to them! In certain circles, people now think of me whenever someone mentions dogs. That's exactly what I want;
I've learnt that everyone is in my sales funnel, but not everyone is ready to buy immediately.

I've connected with some fabulous people, particularly in 2020. Through networking I met a chap connected with my local Chamber of Commerce, and he told me I qualified for 12 hours' free training and mentoring. Most of those were one-to-one with him, and he gave me so much guidance and support, really giving me plenty to think about. I was also eligible to attend a Facebook marketing masterclass which would ordinarily have cost around £400 but it was free. It was one of the best courses I've ever been on.

Sara Burney
The Bark Side Limited