Tim Parker has quite the story. Stemming from his desire to flex his entrepreneurial muscles at Cardiff Metropolitan University—opting to try his hand at an enterprise project instead of a dissertation—Tim has since founded Sportfolio, a platform aimed at bridging the gap between athletes and sporting opportunities, with an initial focus of improving visibility and uptake of university sport.

Ahead of his speaking appearance at Next Gen Fest 2021, Enterprise Nation’s Grace Nelson sat down with Tim to chat through his journey in business – from graduation in 2018 to launching Sportfolio just a year later.

Be sure to secure your free ticket for Next Gen Fest today, ahead of the event on Friday 12 November.

Why did you want to start your business? Was there a specific reason behind this? Did you see a gap in the market?

“One of the reasons I wanted to start my business was because of the opportunity in my final year at university studying Sport Management at Cardiff Met. In the final year, we were, I think, the only course where we had a choice of doing a dissertation or enterprise project. There were thousands of people doing dissertations, so I thought I’d try to stand out and do an enterprise project.

“The enterprise project was basically 60% business plan (8,000 words, a dissertation is 12,000, so it's 4,000 less) but then the other 40% was a presentation They tried to get a few big dogs in to create that atmosphere for your pitch based on hypothetically setting up a business.

“The 8,000 words is essentially the business plan with financial forecasts, how you’re going to get the money, doing your market research, doing a competitor analysis. So, it's great for me because I was able use my market research within the unit speaking to students who have gone to uni and ask: “how did you come to your choice of uni and did sport play a big part?” and that fit really well.

“That’s one of the main reasons that kicked us on; the opportunity to do that in which I got feedback and recommendations to explore the idea further. I got a great mark, which is obviously great, as well as the feedback and environment.

“I see lots of people ask how I came up with the idea, and I hope lots of other bigger businesses come from owned experiences. So that was a massive part in terms of me going to university, not realising the sport available and succeeding in doing really well, beyond what I thought possible. I then thought there must be other prospective student athletes who don't know what's available.

“A second thing that kicked me on was going to an event in London. I wanted that market research to find out if it's something which was viable and something I could see going further, so me and my friend went to London for an event, just chucked the end of my student loan in and basically set up a stall.

“There were loads of different universities there with marketing checking out prospectuses, and we just had a basic stall, a laptop, and were saying we can speak to you about our own experiences: what sports are best for different universities, what facilities they’ve got, what different partnerships they’ve got with outside organisations, and we ended up having about 300 signups in an hour-and-a-half, just of people not knowing what were the best universities for their sport.

“They had an idea, they knew Loughborough was good, but if you don’t have those academics, it’s hard. You can ask: I play basketball, what's the best university for basketball? I play at this certain level, do they have competitive Saturday league? Do they have recreational participation? So in short, that was obviously a massive part as well - diving in and really getting that feedback.”

In terms of creating a new product, did you identify any trends in the industry that drove you to doing so?

“In terms of trends, definitely. It was one from my own experiences of not realising the opportunities, and also seeing the impact sport had on people at university when I was there. One thing now is I can get a degree online at home, in my living room, pay seven, eight, nine grand for it and get it straight at home. Then people ask why they have to go to university! But universities provide that market and that full experience. They can get that degree just sat home, so how can we promote that full value for money?

“I think that was one big trend because there was no platform at university to market their sport credentials to a large database.”

What were the challenges you faced when starting a business so young? Were there obstacles in place because of your age?

“I think age is a massive one because people look straightaway and think: oh, you've just come out of uni, you're fresh with an idea. You're not 35 with experience in a particular industry so, they don't write you off straight away, but it’s still an ‘alright, let’s hear about it’ kind of thing. I think that's a massive challenge, being a sole founder. You can’t have that one person to bounce ideas off and sit over the table. You’ve got to maybe look elsewhere.

“I just had to network and speak to people and that was massive in helping with that. Being able to speak to people to get introductions to others is a great way of getting involved.” 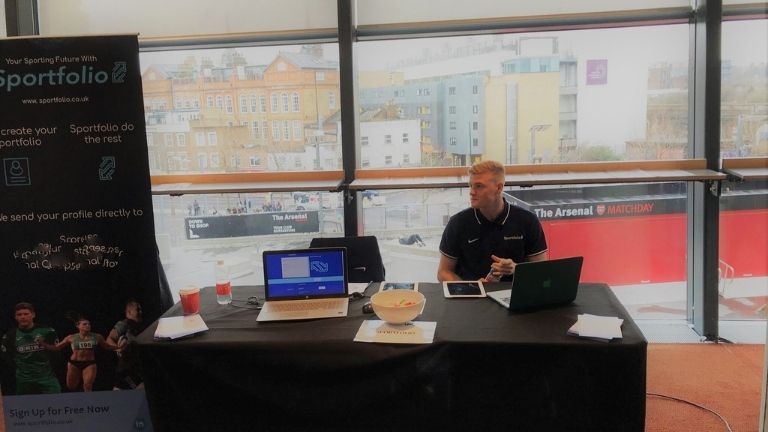 It must have been intimidating, being younger than most other people. How did you overcome that and how did you find the confidence to think: I have this great product, I just need advice? Did you find communities online?

“I think it started being introduced to one person who I think might have gone to university before or he was just in Cardiff, and he set up his own business a few years ago and had some time to speak to people - and then that person introduced me to two other people.

“I then got two recommendations from one of those people to two other people and it just spiralled from there. So now when I speak to people, I say I've spoken to this person, that person, people in the right industry, and people start to realise it isn't just a little something, you've got more than an idea, but it was definitely hard to begin with.

“Going back to your question of simply being young and having to speak to someone who has maybe has five, six, seven years in the industry, I don’t take too much time - I literally want 20 minutes, just to grab a coffee, because I know how busy they are, probably on lunch breaks and they may have 10 other people my age who are trying to ask for five minutes of their time.

“It’s actually really tough, but I think you've got to be quite thick skinned; I’ve probably sent 150 messages with no replies. Not everyone’s going to be like: ‘yeah that’s great!’ I think you just have to put yourself out there and the ones that come back you’ve really got to appreciate their time getting a coffee. And the other ones that, don't you've got understand it might not be the right time, you can go back to them and ask if you caught them at a bad time and whether they can speak another time.”

For the Next Gen Fest audience who will be tuning in to listen to you, would you advise that they utilise university? Would you say making use of the connections through university or using that support is beneficial to them?

“Yeah, I think universities take big pride in their alumni. The alumni sort of stay with a uni, and they’re much more inclined to speak if you’ve gone to that university, so that’s something to consider.

“If you're looking to speak to people, whether that’s with directors, course lecturers or staff, just explain about what you're doing - they'll definitely know notable alumni.”

At Next Gen Fest there will be a lot of people listening who are looking to potentially build a business for the first time. When you were starting out, what support would you say you were most in need of?

“I’ll be clear: I just needed money. I needed money. But also, if you've got that money too early, you're just going to use it on stuff which isn't right at the time. To go back to the question of what I needed right at the very start: one was guidance. You class yourself as old at 23/24 but you are still quite young in terms of coming out of university.

“So, guidance in terms of networking conversations, how things are actually going to work. I feel like everyone that starts a business has to be slightly naïve - you've got to have that characteristic. But at the same time you've got to be realistic and open: how’s it going to work? What is the functionality? How am I going to make money? And if I have to work on this 10 hours per week, I need another job on the side.

“Figure and understand the sacrifices: if you’re going to do this you might have to move home for a bit or get a job on the side.

“Also, that guidance, that mentor, being a sole founder and being able to speak to people and ask: ‘what do you think?’ is massive."

Tim is one of the many fantastic speakers at Next Gen Fest on Friday 12 November, so be sure to snap up your free ticket today!