More than 90 new businesses an hour created in the UK

A total of 93 new businesses were created every hour in the UK during the first half of 2022, according to new analysis of Companies House data.

Small business lender iwoca found that over 402,000 firms were registered between January and June, up 18% on the 340,500 set up during the same period last year.

London and West Midlands top areas to start a business

London was home to the highest concentration of start-ups with 1,587 new companies per 100,000 people. This was followed by the West Midlands with 571 and North West with 554. The lowest rate was in Scotland where 338 new businesses per 100,000 people were launched.

When comparing 2022 to 2021, Yorkshire and Humber saw the highest percentage increase with a 41% rise. Next was the East Midlands and Wales which both saw a 24% uplift. 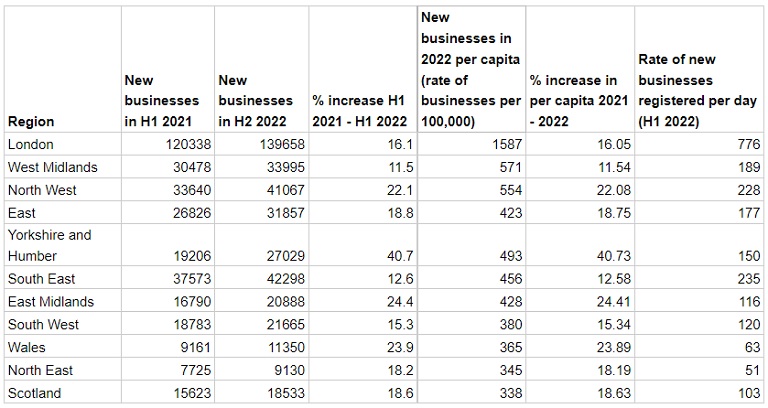 Analysis of local authorities showed the top 10 were all in London. Camden topped the list with 21,439 new start-ups set up in total, a rate of 119 a day during the first six months of the year. Outside the capital, Manchester had the most with 1,165 per 100,000 people. 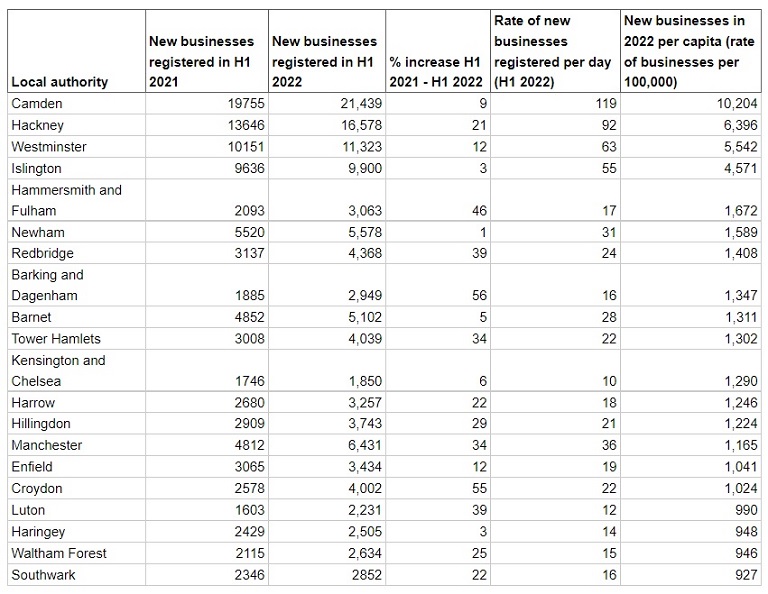 The rise in start-ups sits alongside an increase in the number of workers moving jobs, which increased to a record high of 997,000 during the first quarter of 2022.

Office of National Statistics data shows that a large proportion of the moves were driven by resignations which iwoca said suggests that some workers may be deciding to quit their job and set up a business.

One of them is Cassie Ryan, owner of Birmingham-based NOIR Footwear. She said:

"I have always dreamed of setting up my own footwear brand, and during the pandemic I decided to bite the bullet and actually do it.

"As a single parent on furlough, I enjoyed the extra time I was able to spend with my daughter, and realised that I wanted the flexibility not only to chase my dreams, but to also achieve a better work life balance.

"It's been an incredible 12 months. I have enjoyed some successes whilst also learning from the challenges and mistakes along the way. There is no doubt that this is an exciting journey and I hope to continue to grow over the next few years."

Enterprise Nation's StartUp UK Tracker shows that the number of business formations in 2022 hit 500,961 on 18 August, just over 2% higher than it was the same time last year.

With another four-and-a-half month stretch ahead, it is expected the total number could hit 780,000 by 31 December for the first time.

"We see evidence of this shift towards starting a business every day. The dramatic increase straddles every age group and demographic and covers everything from hospitality to engineering and everything in between.

"While not all of those registered will become fully-fledged businesses, these figures are indicative of an upwards trend towards people recognising they can be their own boss and that launching a company is a brilliant career path to follow.

"This trend may also reflect the fact that more people are looking to supplement their income as inflation starts to bite and are looking to run a business as a side hustle, at least initially.

"What they need is support and advice to help them really take their business to the next level."

Get advice on starting and growing a business

Visit Enterprise Nation's StartUp UK hub for resources that give you the education and inspiration to get started on your entrepreneurial journey.