Learn somethingMini-Budget 2022: What it means for small businesses
Business news

Mini-Budget 2022: What it means for small businesses

Chancellor Kwasi Kwarteng has announced what the government describes as its 'Growth Plan' but many are calling a mini-Budget.

It included a wide range of tax cuts and other measures aimed at boosting economic growth. Here's what small business owners need to know about the announcements.

UPDATE: Kwasi Kwarteng was sacked as chancellor on 14 October. His replacement Jeremy Hunt reversed most of the mini-Budget announcements. Full details here.

Announced prior to the mini-Budget, Kwarteng said that the 1.25 percentage point rise in National Insurance, introduced in April this year, will be reversed from 6 November. The announcement covers Class 1 (both employee and employer), Class 1A , Class 1B and Class 4 (self-employed) National Insurance Contributions (NICs).

The Health and Social Care Levy, a separate tax due to come into force in April 2023, has been cancelled.

The government claimed that as a result of the changes, almost 28 million people will keep an extra £330 of their money on average next year, with 920,000 businesses saving an average £10,000 next year.

The chancellor said funding for health and social care services will remain at the same level as if the levy was in place with the revenue coming from "general taxation".

Employers and software developers were previously told to include a temporary message on payslips for the 2022/23 tax year to explain the reason for the National Insurance rise. HM Revenue & Customs (HMRC) said this should be removed from 6 November.

HMRC said it recognised that some employers may not be able to implement the changes in time adding that it "will be directing employees to their employers to correct any overpaid NICs in the first instance".

"Making it more affordable for small businesses to take on and pay staff a living wage is particularly important for small and start-up businesses.

"These innovative early stage firms are often pioneers in their field with purpose and energy sustainability at their core and we must do all we can to help them to thrive."

The 1.25 percentage point increase to income tax on dividends introduced in April 2022 will be reversed from April 2023. This will save people an average of £345 next year, the government said.

The speech confirmed the already announced support for businesses in dealing with rising energy costs. The wholesale cost of energy will be capped at £211 per MWh for electricity and £75 per MWh for gas leading to energy bill discounts of around half for businesses.

The discounts will be automatically added to bills and apply to fixed contracts agreed after 1 April 2022, as well as to deemed, variable and flexible tariffs and contracts. It will cover energy usage from 1 October 2022 to 31 March 2023 for all non-domestic energy users.

The chancellor said that the six months of energy support for businesses and households will cost the exchequer £60bn.

Former chancellor Rishi Sunak announced in March 2021 that the main of Corporation Tax would increase from 19% to 25% in April 2023. Kwasi Kwarteng has cancelled that plan.

UPDATE: On 3 October, Kwasi Kwarteng announced that the government will no longer be scrapping the 45% income tax rate.

From 6 April 2023, the 2017 and 2021 reforms to the off-payroll working rules, also known as IR35, will be scrapped. The changes require the end client to determine the employment status of a contractor and pay the appropriate amount of income tax and national insurance. They were designed to stop "disguised self-employment" but have been heavily criticised as placing too many burdens on businesses.

From 6 April 2023, the responsibility for determining their employment status will return to contractors providing their services.

The full Growth Plan document says the changes will:

"...free up time and money for businesses that engage contractors, that could be put towards other priorities. The reform also minimises the risk that genuinely self-employed workers are impacted by the underlying off-payroll rules."

The chancellor announced the government has "agreement in principle" with 38 areas to create new investment zones. The areas including the West Midlands, Hull, Somerset and Tees Valley.

Similar to the freeports announced by former Rishi Sunak, the zones will provide tax breaks for businesses including 100% relief from business rates on newly occupied business premises, and some existing businesses which expand in English investment zone tax sites. 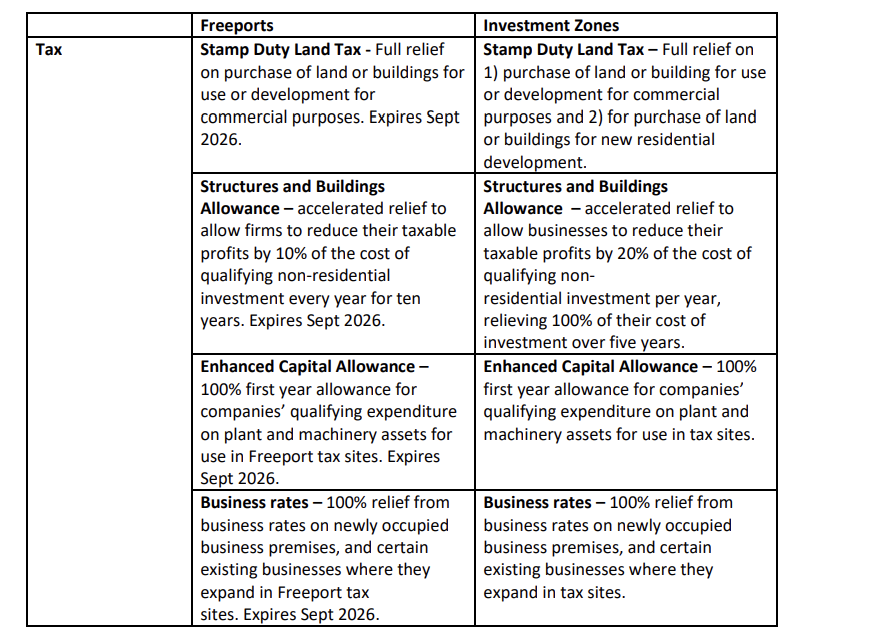 The Seed Enterprise Investment Scheme helps businesses raise funding by giving tax relief to investors. From April 2023, companies will be able to raise up to £250,000 of SEIS investment, an increase on the current £150,000.

To encourage more companies to use SEIS, the gross asset limit will be increased to £350,000 and the age limit from two to three years. In addition, the annual investor limit will be doubled to £200,000.

The temporary £1m level of the Annual Investment Allowance (AIA), which was due to end of 31 March 2023, will be kept in place. It means businesses can deduct 100% of the costs of qualifying plant and machinery up to £1m in the first year.

Business owners looking to buy a house will be interested in this measure. Kwarteng announced that for people buying properties in England and Northern Ireland, no stamp duty needs to be paid on the first £250,000, up from £125,000. For first time buyers, it rises from £300,000 to £425,000. The changes is introduced from today.

The planned increases in duty for beer, cider, wine, and spirits will all be cancelled.

The chancellor also announced an 18-month transitional measure for wine duty and an extension to draught relief to cover smaller kegs of 20 litres and above "to help smaller breweries".

Enterprise Nation's reaction to the mini-Budget

"It's bold, it's agile and it's speedy. Economists will be arguing for months to come, but small businesses will be waiting for the impact of this budget trickling down into their sales tonight.

"The new administration clearly set out its stall today and that it is firmly on the side of entrepreneurs and wealth creators. The tax cuts, both business and personal, will deliver confidence and unleash the entrepreneurial spirit that we know exists across the UK and to which the chancellor referred so often.

"The UK's small businesses have wanted growth acceleration but have had to be content with stagnation because of barriers to growth such as access to finance, business rates and employment complexity.

"The extension of EIS and SEIS and the pension charge cap reforms will be welcomed with open arms by the small business community and we expect more start-ups to follow with an emphasis on supporting those who are 50+ to move from unemployment into self-employment. Thanks to the removal of IR35, many experienced individuals that left the employment market will now return.

"Our view for more than a decade has been that one of the most important things a government can do is to champion entrepreneurs and this morning’s statement and announcements most seriously deliver on that.”