Meet the Chai Guys: November's Members of the Month

It was a year after launching their business - centred around India's most popular drink - that co-founders Abhilash Jobanputra and Gabriel Unger knew they were on to something.

Chai Guys - the name they came up with almost immediately - was established in three central London locations. Twelve members of staff were on the books.

And then COVID happened. Abhilash and Gabriel went from opening a fourth outlet in Covent Garden to shutting up shop completely; their time spent chasing local authority grants and working out how to diversify.

But - with a little help from a Salesforce small business grant - diversify they did. Now, four months later, Chai Guys has not one, not two, but three revenue streams; two new products; and some very exciting plans for the future.

I caught up with Abhilash and Gabriel, over an outrageously tasty chai or five, at their Spitalfields base.

Chaps, tell me how - and why - you founded Chai Guys?

Abhilash: "Gabriel and I became good friends in 2016, when we were working in the corporate world at Deloitte. The Indian in both of us - Gabriel lived in Delhi for six years, and I'm from there originally - just started wondering why there was no good chai place in London.

"We came up with the name 'Chai Guys' straight away, but it wasn't until 2018 that we actually decided to do something about it."

Gabriel: "What really kickstarted the idea was going to India. Everything we discussed on that trip has actually happened - by trying lots of different chai, and immersing ourselves in chai culture, we knew we needed a menu of one spiced masala chai, one creamier, sweeter kadak chai, and one wildcard option: the Kashmiri chai [which is indeed, as per the Chai Guys' menu, like nothing I've ever tried before]." 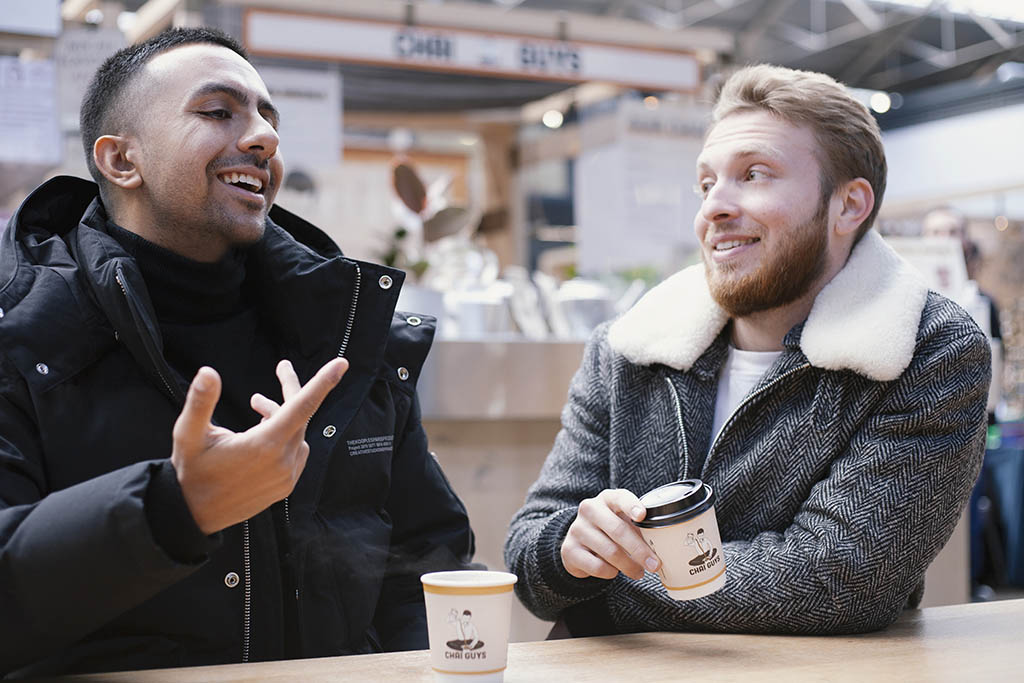 A: "On the trip we also secured a deal with a tea supplier. We bought three different types of tea - two types of black, and one green for the Kashmiri chai. They're all still on our menu today. When we got back, we spent our weekends experimenting and basically trying out different recipes."

I wonder why chai wasn't a thing in the UK, because you both obviously recognised its potential…

G: "I think the risk for us was launching in central London. Chai is popular on the outskirts, but there wasn't an authentic chai place in the city centre. What we had going for us is more people going to India and discovering chai, then wanting to drink it on their return.

"We opened our first location at the weekend market on Brick Lane. From day one we made money. People knew 'chai' because coffee companies have popularised it. But rather than 'chai latte', we called ours 'authentic chai'.

"With our personalities, we were able to explain to customers why our product is different. Then we invited them to have a taste: 'Honestly, we think you'll like it. It tastes better. And it just so happens to be healthier.' In terms of attracting customers, the brand was also key."

A: "We built it around showcasing authentic chai. We knew that, if it was going to work, we needed to do three to four variations of a single product, and do them very, very well.

"You asked why chai isn't widely available in the UK. It takes a long time to make. It's not like coffee, where you can just use a machine. You have to brew chai like a soup. It takes us 45 minutes."

I guess a lot of people don't know about the labour of love that is making a cup of chai. Are your customers aware? Is this part of the Chai Guys story?

A: "We love showing people how it's done. Customers ask why it tastes so different to chai latte. That's when we say that authentic chai is made like a soup. You're cooking spices, water, tea, sugar together in a big pot for three quarters of an hour.

"Our staff have a real intimacy towards the product. They spend 45 minutes peeling ginger, grinding spices, cooking the chai. There's an element of competition - chai is a thing that's had in a lot of Indian households, and everyone thinks their mum's is the best.

"We've tried to create that tradition, that competitive environment, so the guys know what they're selling. They're passionate about their chai."

You've both mentioned your brand, which is obviously strong. Tell me how you created it…

G: "We wanted to pay homage to where chai comes from. The brand is very approachable. It's Instagrammable. People want to be part of the Chai Guys brand.

"The product is key, but the branding - and our salesmanship - brings people in. It's allowed us to gain credibility and actually be in a market like Spitalfields. To get locations in London you need to have good visuals.

"It was important for the brand and main logo not to be gimmicky or cartoony. Our illustrator and branding partner worked together to create the main logo that represents us. The actual illustration needed to be respectful, which is hard to get right. Our illustrator did a phenomenal job. We knew what we wanted, but we needed somebody to put it down on paper. When we saw their illustration, we were blown away."

How has Enterprise Nation helped you?

G: "Spitalfields is our second location after Brick Lane, and our first full-time one. After a couple of months we opened a third location in Victoria. And in April this year we were due to open a fourth in Covent Garden. Then COVID happened.

"Within a year we had made immense progress. We had 12 staff members. We were just about to hire two more people. But when COVID struck, we had to close everything. Our revenue dropped by 100%.

"Very early into COVID we created a CPG [consumer packaged goods] product. Within five days, we had tea and spice blends available to buy on our website. We needed to be quick because we had staff members who missed out on furlough. We carried on paying them, but we had to stop paying ourselves.

"We weren't able to get a grant from Westminster City Council for our Victoria location because the previous tenant was down as the business rates payer. We missed out on a grant in Spitalfields because it's a shared premises."

A: "Mentally, we had to stay intact. We went from what was shaping up to be the best summer of our lives to closing everything, chasing grants and then diversifying the business. And then of course the bigger picture stuff; obviously everyone was worried about their families."

G: "But then came along Enterprise Nation! We had heard about your partnership with Salesforce, offering £5,000 grants to small businesses affected by COVID. So, when Abs and I were able to reopen Spitalfields in June, we submitted an application and uploaded a video. We were fortunate enough to be accepted.

"The grant has allowed us to diversify our business, by which I mean getting on Deliveroo. We needed to be able to sell our products to people who didn't want to leave their house. But chai does not travel well unless it stays hot - so we needed a custom product.

"We ended up working with two companies to create the only flask of its kind in the UK - one made the exterior cardboard, the other the aluminium interior. It keeps chai hot for two hours, so it travels brilliantly. It wouldn't have been possible without the grant."

A: "It also helped with the CPG product, in that we were able to order brilliantly made branded tins. We always wanted to launch these, but the grant really expedited the process. We're now able to encourage people to make chai at home in an authentic way."

What's next for Chai Guys?

G: "Now we're diversified, with revenue streams from our stores, online and delivery, we're focusing on something that Abs and I are very, very passionate about: food.

"We're going to follow the same mindset we had when creating the chai concepts - a small menu of carefully selected items that we can pair with our chai."

Finally - and I'm really dying to ask this - how many cups of chai do you both drink a day?

A: "Around three at the moment. I mean, we've been having chai every single day since we launched. And since August, COVID aside, we've been open seven days a week!"

G: "I tend to drink two to three cups of masala chai. I'll start with a big cup and go down to smaller ones because chai does have caffeine in."

In normal circumstances, you could catch the Chai Guys at their Old Spitalfields Market location in central London. With new national restrictions taking effect on 5 November, however, you'll have to settle for ordering their tea and spice blends direct to your home.