An articulate English literature student, who set-up an all-female book subscription service while still at university, has won this year's Female Start-Up of the Year award.

Just two years after launch, 22-year-old now-graduate Molly Masters' firm Books that Matter, already has more than 8,000 paid-up subscribers and is growing that list by between 700 to 1,000 every month.  Her feminist podcasts constantly reach more than 11,000 people.

Judges at the annual awards, run by small business support network Enterprise Nation, voted unanimously that Molly was the clear winner after watching the competition's three female finalists present their firms in front of a 300-strong live audience at the Festival of Female Entrepreneurs earlier this month.

Bristol-based Molly, who graduated from the University of Sussex in English Literature last year, said: "The business idea grew out of my frustration that studying the work of female authors only happens at a high level in the UK's education system.

"Our current English GCSE curriculum offers 19 available books for study. Only one is by a woman. How can we expect women and girls to grow up empowered if they don't see themselves represented in what they read?" 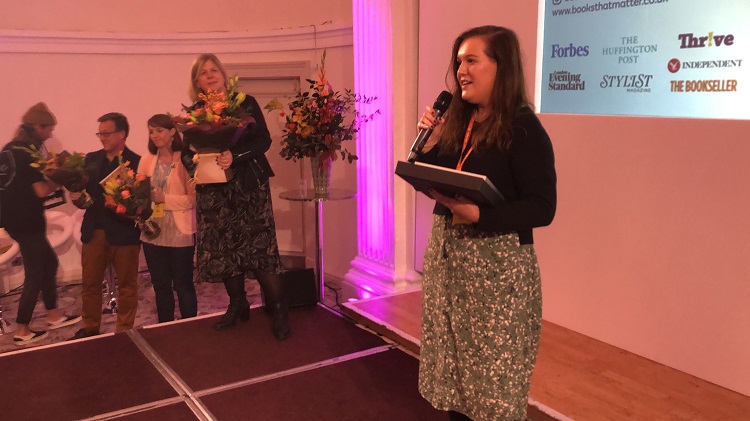 After doing some research into the idea's potential, she found some compelling statistics: the global subscription box market is worth £583m and is set to grow to a billion by 2022. In addition, 75 per cent of all book buyers are women, she told the audience.

Books that Matter now delivers monthly tomes written by women, plus gifts from female and female-identifying, non-binary independent creatives to its booming list of subscribers for £16 a month.  When it launched in September 2017, it sold out within days.

"It feels a little like we've reached a tipping point and the business is growing incredibly fast.  It's so wonderful to win this prize so early in our journey and it means a great deal, it's going to help us a lot in opening up new opportunities and networks," Molly said.

"It's been very, very empowering and validating to be surrounded by and recognised by female entrepreneurs."

Molly was up against some strong opposition. London-based Kay Suppamas, founder of Leafage, a firm that offers much-needed connection to the natural world through terrarium workshops and Bristol-based mum Claire Russell, founder of playHOORAY, a campaign and network to encourage, teach and enable parents to play with their children.

Emma Jones, founder of Enterprise Nation and one of the judges on the day, said: "Molly's pitch stood out because she has clearly spotted a gap in the market, has a firm grasp on the market and the figures and has already taken it from idea to thriving business.

"It's so delightful to see driven women like Molly, with a passion and clear skill, dive straight into entrepreneurship while studying and build a sustainable business while she's still only 22.  She is clearly one to watch and that's exactly what these start-up awards are all about."

Previous winners of the Female Start-up of the Year awards include Mel Bound, founder of national exercise network This Mum Runs, Ruth Bradford, founder of The Little Black and White Book Project, Joy Foster, founder of TechPixies, a social enterprise to up-skill female returners to the workplace, and Chloe Tingle, founder of No More Taboo, a not-for-profit aimed at tackling global period poverty.

The awards were backed by the Facebook She Means Business campaign and prizes included £1,000 worth of Facebook advertising credit, mentoring, a Dell laptop and a night's stay in the Mercure Bristol Grand Hotel.

The day-long Festival of Female Entrepreneurs saw female-led SMEs flock to Bristol to explore issues and find solutions - as well as be inspired by keynote speakers including Dame Stephanie Shirley, the 86-year-old tech pioneer and Nisha Katona, founder of the Mowgli restaurant chain.

The festival will be back next year.