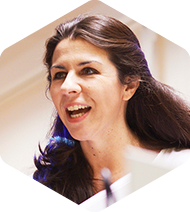 Emma is the best-selling author of the business books Spare Room StartUp, Working 5 to 9, Go Global, The StartUp Kit and Turn Your Talent Into a Business .

She hosts the popular one-day business class StartUp Saturday in London, and speaks at several other business events.

In November 2015 Emma was appointed by the UK Prime Minister as a Business Ambassador with a focus on increasing international trade.

Following a degree in Law and Japanese, Emma joined international accounting firm Arthur Andersen, where she worked in London, Leeds and Manchester offices and set up the firm's Inward Investment practice that attracted overseas companies to locate in the UK. In 2000, bitten by the dot.com bug, Emma left the firm to start her first business, Techlocate.

After 15 months, the company was successfully sold to Tenon plc. The experience of starting, growing and selling a business from a home base gave Emma the idea for Enterprise Nation which was launched in 2006 as the home business website.

The company has since expanded to become a small business membership community of over 75,000 people who benefit from events and support: online and in person. Enterprise Nation also presents a campaigning voice to government and the media on behalf of its members.

In 2021, Emma was awarded a CBE for services to small businesses and entrepreneurs.

In March 2011, Emma was one of eight co-founders to launch StartUp Britain, the national campaign to encourage more people to start a business and support existing businesses to grow.

Over a period of 3 years (March 2011 to 2014), Emma led and managed the private sector campaign that facilitated mentoring, hosted Industry Weeks, toured the UK with entrepreneurs and experts, launched special projects such as PopUp Britain and had a critical role to play in record results of people becoming their own boss.

Emma speaks regularly at events and conferences. To make a booking enquiry for your event, please email hello@enterprisenation.com

Download a more detailed bio and images of Emma Jones To download variants of the Enterprise Nation logo for use in publications and on websites, click here.