You'll notice a lot of content about small businesses in Bristol, Bath and other places in the south west over the next few months. Enterprise Nation's new head of content Dan Martin explains why.

I've already admitted that I'm an adopted Bristolian. I was born in London and lived there for 30 years before made redundant and moving to the city for work. I'd only ever visited Bristol once previously and it was for about 20 minutes on the way to Cornwall, but nine years on I proudly call it my home.

If you're a small business journalist it's a great place to be based. There's enterprise, creativity and innovation oozing out of ever corner of a city that is home to maverick graffiti artist Banksy and engineering genius Isambard Kingdom Brunel. 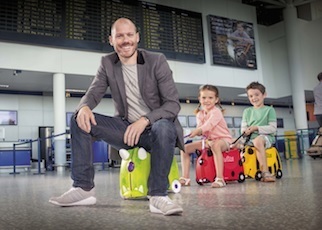 There are some fantastically successful entrepreneurs based in Bristol that have avoided the lure of London. Among them is Rob Law and his ride-on children's suitcase brand Trunki, turned down by the investors on Dragons' Den but now a company that turns over Â£8m. It's based in a converted church and the office comes complete with a slide!

Then of course there's Aardman, the brains behind Wallace and Gromit. I've been lucky to blag a tour of the animation firm's studios and it's amazing!

But it's not all about multi-million pound businesses; there's a burgeoning startup sector with co-working spaces and incubators popping up all over the place. The main shopping area of Bristol, traditionally home to big chains, is getting in on the small business action with pop-up shops and other independent retailers, while the magnificent Old City area, which survived Hitler's bombs, has thriving street markets and quirky cafes including one that has been a coffee shop almost continuously since the 1780s.

The tech scene is also booming. According to a report released last year Bristol and Bath is the biggest technology hub outside London with the Engine Shed, home to accelerators SETsquared and Webstart Bristol, leading the way.

So what does this all mean for Enterprise Nation?

With me based in Bristol we're going to bring our community out west! We'll got lots of things planned so keep an eye on the site.

What we can tell you is that Enterprise Nation founder Emma Jones will be speaking at SETsquared's high profile small business showcase in July and she'll also be judging The Pitch 2015, a nationwide small business competition I founded in my previous role which has its final in Bristol on 12 November.

This week I'm also attending a couple of great events. Startups will be pitching in Bath tonight (13 May) and hundreds of business owners are expecting to attend Business Showcase South West in Bristol on Thursday and Friday to hear speakers including Levi Roots and Gerald Ratner. Keep an eye on our Twitter feed for live updates.

We are on a mission to create a truly entrepreneurial nation and adding a new focus on Bristol, Bath and the west will help us do that. We've also got plans to build stronger communities in other parts of the UK too so watch this space!